Korean manufacturing in crisis, beset by rising costs and competition

Korean manufacturing in crisis, beset by rising costs and competition 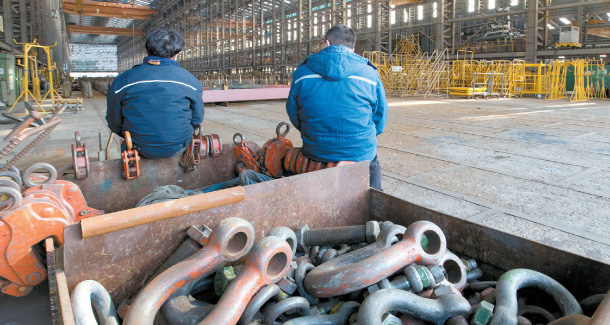 A lumber facility in Incheon sits idle on a weekday. Ten years ago, the mill would have been bursting with activity, running 24 hours a day to keep up with piling orders.

Today, the company only hires part-timers when there’s work.

“In Incheon, there used to be a lot of furniture companies,” said the company’s 68-year-old CEO, who wished to remain anonymous. “But everyone has been relocating their plants overseas because they have been burdened by rising costs, including labor expenses.

“For 30 years, I have been running this plant,” he lamented, “but it seems I, too, have reached a point where I have to fold my business.”

The lumber facility is located in the Incheon Industrial Complex, once the front line for Korean exports and now a shadow of its former self. Last year, the amount of goods produced at the complex totaled $4.27 billion, down 9.5 percent from 2015. The biggest drop was in machinery, where exports plummeted 41 percent, followed by steel with a drop of 31.5 percent.

With less work, companies there have been laying off employees one by one. It is a symbol of what’s happening across Korea’s manufacturing industry, which is seeing its flames die out.

In the second quarter this year, the average operating rate at factories was 71.6 percent, meaning three out of every 10 production lines were on break. It was a 1.6 percentage point drop from the same period last year and the lowest since the global financial crisis, when the operating rate in the first quarter of 2009 was 66.5 percent.

Manufacturing has been the backbone of Korea’s economic growth. Exports of automobiles, textiles and ships have contributed to the creation of steady jobs. Although the service industry also contributes to the job market, the quality of jobs doesn’t match up to manufacturing.

“Whether it is increasing production or creating jobs, the effect of the manufacturing industry is huge,” said Kwon Tae-shin, president of the Korea Economic Research Institute, a private think tank, “It has the impact where the development of manufacturing also leads to the development of other industries, and that is why countries like the United States, Germany and Japan are emphasizing manufacturing, because they see it as their economy’s foundation.”

A dearth of orders and glut of competitors has forced many Korean industries to restructure. Shipbuilders like Hyundai Samho Heavy Industries, Hyundai Heavy Industries and Hyundai Mipo Dockyard have been sending their employees on leave with pay because they haven’t received orders, while the companies are being closely chased by rivals in other countries like China.

“The current state of Korean manufacturing is the result of various factors including weak productivity, price competition amid a tight pursuit from emerging countries like China and the relocation of factories overseas,” said Sung Tae-yoon, a professor of economics at Yonsei University. “Except for semiconductors, many manufacturing industries are facing hardship.”

During the first half of the year, semiconductors contributed to nearly half of Korea’s trade surplus. When excluding computer chips, the surplus shrinks from $45.8 billion to $21.6 billion.

By comparison, the trade surplus last year excluding semiconductors amounted to $37.5 billion. Whereas IT-based manufacturing is thriving, traditional manufacturing is faltering, and it’s having an effect on the overall economy as fewer jobs in production means less consumption of services.

For over five decades, Samick and Young Chang, both manufacturers of pianos, dominated the local market. In 1992, sales of pianos in Korea reached an all-time high of 187,000.

But then sales started falling, and labor costs went up. Last year, only 3,600 new pianos were sold in Korea.

Today, Samick has relocated all of its piano plants to Indonesia, while Young Chang has moved all of its production, except for that of premium models, to China.

“Considering the productivity, we had no other choice but to move overseas,” a Samick spokesperson said.

In recent years, the overseas output of Korean companies in chemicals, machinery and metals has exceeded domestic output, according to the Bank of Korea.

In chemicals, overseas production accounted for 45.5 percent of all production by Korean companies in 2011. By 2015, it rose to 52.2 percent.

The situation is similar in other industries. Overseas production of metal was 43.2 percent in 2011 but went up to 51.8 percent in 2015. Textile companies, too, are relocating elsewhere or closing business entirely.

Automobiles and IT, considered the key pillars of Korea’s economy, have been opening factories overseas, citing market expansion and lower costs. A recent study by the Korea Chamber of Commerce and Industry showed that Korean companies had 1.63 million overseas workers in 2015, up from 530,000 in 2005.

It’s not jobs that are lost. The local economy, including the commercial districts where plants used to be located, is also affected. The contribution of manufacturing to Korea’s economic growth in the last two years has been less than 1 percent. Last year, it was 0.5 percent, and the year before, it was 0.3 percent, representing the first time that manufacturing’s contribution to the economy has been less than 1 percent for two straight years.

In 2013, the Korean government came up with a plan to encourage manufacturers that relocated overseas to reshore and contribute to the local economy. The plan included tax cuts and subsidies.

Ever since, only 40 companies have returned.

The government plan suffered from short-lived hype. More than half of the companies reshored within the first year, but by this year’s first half, only two more companies returned to Korea.

Similar efforts in Japan have yielded more fruitful results. Among 834 companies that outsourced their production, nearly 12 percent said they had relocated back to Japan, according to a study conducted by Japan’s Ministry of Economy, Trade and Industry last December.

Among those companies, 8.5 percent returned from China, according to a study earlier this year by the Japan External Trade Organization, exceeding the 6.8 percent of outsourcing Japanese companies going to China.

“The incentives [provided by the Korean government] are not attractive enough to overcome the high costs that manufacturers face [in Korea],” said Hwang Yong-sik, a professor of international business at Sejong University. “It is necessary to create an environment where companies can do business better than in competing countries that have been lifting various regulations.”