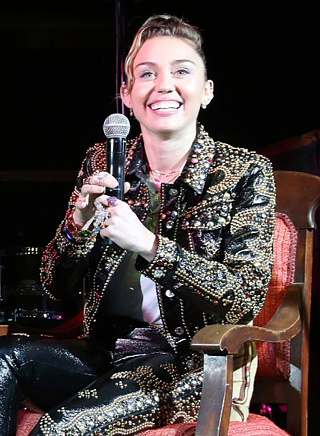 NASHVILLE - Pop star Miley Cyrus returned to her Tennessee roots, musically and geographically, for the release of her new album “Younger Now” with a hometown performance at Nashville honky-tonk.

Cyrus answered questions from her fans and chatted with her dad, country singer Billy Ray Cyrus, during Friday night’s welcome home party thrown by the streaming service Spotify. She then performed a short set of her new songs during the appearance at Tootsie’s Orchid Lounge.

As an artist who constantly reinvents her persona, Cyrus declares on the title track that, “No one stays the same.” On this new record, she’s more serene than shocking, with more twangy pop melodies than dance hits.

Fans camped outside the bar for hours hoping to see the singer, who grew up in Nashville before becoming a teen television star in the Disney Channel program “Hannah Montana.” Her career transition provided plenty of provoking moments as she embraced her sexuality and sought to ditch the wholesome teen act.

Now 24 years old with six studio albums, Cyrus told her fans that she was no longer running from her old music, but embracing the songs.

“Allowing them to mean something to me, even though I have grown past them in a way,” she said.

She told stories behind the songwriting and inspirations, such as wanting to normalize bisexuality on the song “She’s Not Him.” She also said that the song “Inspired” was written about both her dad and Hillary Clinton.

“My dad inspired this record a lot,” she said.

She also talked about her duet “Rainbowland” with her godmother, country icon Dolly Parton, who Cyrus said is so old-school that she still uses a typewriter.

“We seriously wrote that song via fax,” Cyrus said.

During a conversation with her father, the two joked and ribbed each other and offered up professional advice as singers and songwriters.

“You can learn from my mistakes,” Billy Ray Cyrus said. “Watch what I do and don’t do that.”

But her father said he was immensely proud of Cyrus and her willingness to be herself and stand up for issues that were important to her.