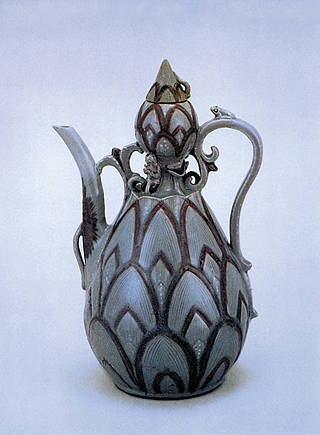 The ewer (height: 33.2 centimeters/13 inches, bottom diameter: 11.4 centimeters/4.5 inches), which dates back to the mid-Goryeo Period (877-1394), has a gourd-shaped body whose surface is covered with lotus leaves.

Its lid looks like a flower bud. Its neck is adorned with lotus leaves as well as the figure of a child embracing a lotus bud.

Its handle looks like a slightly bent scrolling vine with a frog seated at the top. Its spout looks like a rolled lotus leaf.

The technique of adorning blue celadon with cinnabar was used in the early 12th century, but artworks lavishly adorned with cinnabar-made patterns were thought to have appeared for the first time only after the 13th Century.

This piece, showing the cinnabar-adorned edges and veins of lotus leaves, was unearthed from the tomb of Choe Hang in Ganghwa, Gyeonggi-do.

Its splendid cinnabar color makes it a precious artifact for those studying Goryeo celadon.