Tillerson says U.S. is in direct touch with North

Tillerson says U.S. is in direct touch with North 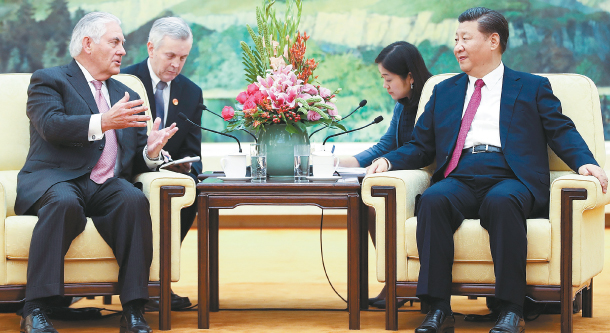 U.S. Secretary of State Rex Tillerson, left, meets with China’s President Xi Jinping at the Great Hall of the People in Beijing on Saturday. [AP/YONHAP]

The Donald Trump administration acknowledged for the first time it is in direct talks with North Korea over its nuclear and missile programs, though Pyongyang has shown no public indication it is interested in or ready for dialogue regarding denuclearization.

Secretary of State Rex Tillerson, who was visiting Beijing ahead of Trump’s planned travel to the region in November, told reporters Saturday that Washington had three direct channels with the North through which both sides communicate, but didn’t explain further.

“We ask: ‘Would you like to talk?’ We have lines of communications to Pyongyang. We’re not in a dark situation, a blackout,” he said, according to Reuters.

Tillerson continued that the Trump administration hasn’t figured out yet directly from Pyongyang what it is they really want to discuss.

Heather Nauert, spokeswoman of the State Department, later said in a statement that American diplomats were communicating with North Korean officials through “several open channels,” though no progress was made in terms of denuclearization.

“Despite assurances that the United States is not interested in promoting the collapse of the current regime, pursuing regime change, accelerating reunification of the peninsula or mobilizing forces north of the DMZ [demilitarized zone],” she said, “North Korean officials have shown no indication that they are interested in or are ready for talks regarding denuclearization.”

On his meetings with China’s Foreign Minister Wang Yi, State Councilor Yang Jiechi and President Xi Jinping, Tillerson was described by the State Department to have talked about the denuclearization of the Korean Peninsula, trade and investment.

South Korean government officials with knowledge of North Korea affairs explained on the condition of anonymity that one channel Washington was using to reach out to Pyongyang could be its United Nations mission in New York, known as the “New York channel.”

Joseph Yun, special representative for North Korea policy at the State Department, is known to have talked with Park Song-il, North Korea’s deputy chief of mission to the UN, earlier this year in New York about American prisoners held by the regime. Those discussions ultimately led to the release of the college student Otto Warmbier, who arrived home in a vegetative state and died six days later.

“Officials from Washington and Pyongyang either gather in New York whenever there’s an issue of mutual interest, or each country’s UN mission shares their government’s opinion with the other side,” a local government official said.

Another channel, according to another former South Korean official, is through email. In this case, due to security risks, the U.S. government is said to communicate with Pyongyang through scholars in the private sector who have similar perspectives with the administration.

Or the Trump White House may be conversing with the North Korean regime through the so-called track 1.5 dialogue, or semi-governmental, semi-private discussions participated in by former American officials and currently active North Korean officials.

The last of such talks was in May in Oslo, Norway, when Choe Son-hui, director general of the North American Department in North Korea’s Foreign Ministry, led a delegation from her country to talk with a team of U.S. representatives that included Thomas Pickering, former U.S. ambassador to the UN, Robert Einhorn, former special advisor for nonproliferation and arms control at the State Department, and other think tank experts.

Local sources with knowledge of the talks told the JoongAng Ilbo that Choe had asked Washington to ditch its anti-North Korea policy and sanctions as well as sign a bilateral peace treaty that would replace the armistice and formally end the Korean War in exchange for a halt to all missile and nuclear testing.

Choe, in fact, traveled to Moscow last week in what appeared to be North Korea’s effort to find an exit from intensifying global isolation after carrying out a sixth nuclear test on Sept. 3.

In an English dispatch, KCNA said Choe stressed it was “necessary for the U.S. to stop its hostile policy toward the DPRK in order to defuse tension and ensure peace and security in the Korean Peninsula and the Northeast Asian region,” using the acronym of North Korea’s official name, the Democratic People’s Republic of Korea.

Russia was said to have expressed its “understanding” of North Korea’s stance and showed it had the “intent to make joint efforts for detente on the Korean Peninsula.”

In regards to the bilateral talks, spokeswoman Nauert of the U.S. State Department said last week in a regular briefing that Washington didn’t see it as a “bad thing.”

“Diplomacy is our preferred approach,” she said. “If Russia can be successful in getting North Korea to move in a better direction, we would certainly welcome that.”

KCNA said Saturday it would “reduce America into a sea of flames” if it continued its sanctions and dispatching of warplanes to the peninsula.