Last year, fewer than half of the Korea Baseball Organization’s foreign players renewed their contracts at the end of the season, but this year, the number is expected to be higher as the teams’ hired hands from abroad have played beyond expectations. 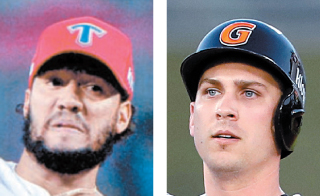 Dominican pitcher Hector Noesi, who has been with the Gwangju-based Kia Tigers for two seasons, is very likely to continue his career in the KBO. If the Tigers win their last game against the KT Wiz today, he’ll pick up an impressive 20 wins this season.

Noesi’s teammate, Roger Bernadina from the Dutch island of Curacao, has also had an outstanding season with the Tigers, recording a 0.322 batting average with 30 stolen bases and 27 home runs in 137 games as of Sunday. He, too, is likely to renew.

Each of the KBO’s 10 teams are allowed to have up to three non-Korean players.

Further east in Busan, the Lotte Giants have had also great success with their foreign players this season.

Their pitcher from Texas, Brooks Raley, picked up 13 wins this season; Colorado native Andy Burns, known better as a defensive player, displayed great offense with a 0.302 batting average; and Josh Lindblom, who returned to the United States last December instead of renewing his contract to take care of his daughter, who was born with a heart defect, helped the Giants hit their stride toward the end of the season with a 3.72 ERA.

In Suwon, the Wiz may be last in the league, but their foreign players have been able to deliver some magic.

Ohio native Ryan Feierabend has the lowest ERA in the league; Donn Roach of Nevada has demonstrated a remarkable ability to ground out batters, despite his record of three wins and 15 losses this season; and Mel Rojas, who joined the Wiz in the middle of the season from the American minor league, has played up to expectations, with a 0.301 batting average and 18 home runs in 81 games as of Sunday.

All three have expressed desire to stay in Korea for another season, and they’re likely to be re-signed.

Other clubs feel less certain about their foreign players.

Dustin Nippert, who won the KBO’s MVP award last year, managed to pick up 14 wins this season with the Seoul-based Doosan Bears, but the Ohio native has gone downhill in the second half. While he is likely to stay with the Bears for another season, there may be some jostling over his contract amount due to his less-than-stellar performance.

In Changwon, the NC Dinos may lose Andy Van Hekken. He and Eric Hacker have managed to eke out 3.000 ERAs, but they weren’t able to play full time this season due to injuries.

But no club probably faces more trouble next season than the Daejeon-based Hanwha Eagles, whose three top Dominican players are unlikely to return. Alexi Ogando picked up 10 wins this season, but he was only able to pitch in 19 games due to an elbow injury, and the team’s other pitcher, Carlos Villanueva, is considering retirement after this season.

Making matter worse, Wilin Rosario, the Eagles’ leading batter, is receiving offers from the American and Japanese leagues. And since the Eagles still don’t have a manager after Kim Sung-keun left in May following a dispute with the club, they have not announced their decision regarding the foreign players.

Finally in Daegu, the Samsung Lions only plan to renew the contract of Darin Ruf, while parting with Kelly Patrick and Patrick Ranaudo.