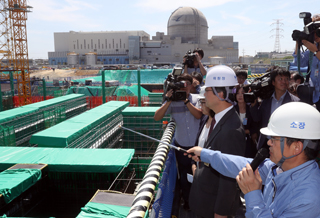 Members of a commission to canvas public opinion on the fate of Shin Kori 5 and 6 reactors inspect the construction site of the reactors in Ulju County, Ulsan, on Aug. 28. [YONHAP]

“There is both light and shadow in all history,” President Moon Jae-in said in his Aug. 15 Liberation Day address. “I, the 19th president Moon Jae-in, will join the history of Korean presidents along with not just [liberals] Kim Dae-jung and Roh Moo-hyun, but also with [conservatives] Syngman Rhee and Park Chung Hee.” He was vowing that he would not mind inheriting the legacies of the rightist and leftist presidents however controversial they were. If he means well, Moon must not disregard the positive endeavors to foster technology and the business diplomacy conducted by conservative presidents with his policy to remove the so-called past evils. He may have tried to square the difference by deciding that the phasing out of nuclear power and promoting nuclear power reactor exports were separate matters.

President Lee Myung-bak spoke with Middle East monarchs six times and flew to the United Arab Emirates to wrap up a landmark deal to build four commercial nuclear reactors there in 2009. Under Lee, Korea went on to develop a small reactor grid that can go on a submarine. Under President Park Geun-hye, Seoul signed a deal with Saudi Arabia to transfer the design for system-integrated modular advance reactor (SMART). The world’s biggest oil producer this month will be embarking on a tender process to pick the builder of its first two 1.4 gigawatt commercial reactors. The deal could be near $3 billion. Moreover, Saudi Arabia is planning to build 17.6 gigawatts of nuclear power capacity by 2032, equivalent to 17 reactors. It wants to diversify its resource base and save oil reserves. Korea has been one of the five short-listed candidates invited to tender as it had already been successful in winning the $40 billion reactor contract in the Middle East in 2009.

But the Ministry of Industry, Trade, and Energy has lost a golden opportunity. Moon was already scheduled to make his debut address to the UN General Assembly on Sept. 18. The energy minister should have gone to the Sept. 19-20 UN-sponsored nuclear technique conference in Vienna, where Saudi Arabia’s deputy prime ministerial level chief of reactor policy was attending. The ministry instead sent a director-level official.

China, which is also a candidate in the reactor bid, dispatched a deputy prime minister-level commerce minister to meet the Saudi prince spearheading the reactor campaign in August. The president’s assurance that promoting reactor exports won’t be affected by the phase-out of nuclear power became questionable. He had already worried the industry by seating a professor championing the nuclear phase-out as the chief of industry and energy ministry.

After the country returns from a long week holiday, a panel of 478 people will vote on whether to continue the construction and commissioning of the Shin Kori 5 and 6 reactors or nullify the project. The Shin Kori 5 and 6 reactors are based on the design Korea would use in the Saudi bid. Saudi Arabia favors Korea because of the relationship it built through the SMART technology transfer process. So why is the energy ministry so lukewarm about the multibillion-dollar Saudi deal? Is it because winning the project could influence the panel in its decision on the fate of Shin Kori 5 and 6?

The deal can still be saved. Moon should lead a delegation to Saudi Arabia for a last-minute pitch. When it sees the will and passion from the president, Saudi could be swayed to choose its favorite candidate. The project also would be cheered by Washington as Saudi is strategically important to the United States. The reactor deal can make the country billions of dollars richer. It can create hundreds of jobs for Koreans. The president must go to Riyadh. He has promised to create new jobs. He should deliver the promise through a Saudi windfall.