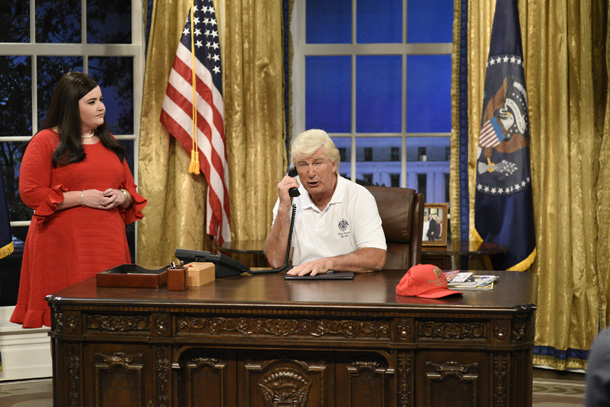 NEW YORK - The new season of “Saturday Night Live’’ wasted no time getting topical - or mocking Donald Trump - with an opening sketch that featured Alec Baldwin skewering the president for his response to the hurricane that devastated Puerto Rico, threatening Attorney General Jeff Sessions’ job and mentioning his standoff with the NFL.

“It’s all part of the plan. The more chaos I cause, the less people can focus,’’ Baldwin joked as Trump, wearing golf clothes in the Oval Office. “Let’s keep the chaos coming.’’

In the sketch, Baldwin’s Trump was unclear that Puerto Rico was an American territory, hung up on the mayor of San Juan, put Sessions playfully on his lap and admitted he liked football. “People say I remind them of an NFL player because I’m combative, I like to win and I might have a degenerative brain disease,’’ Baldwin said.

His Trump said he rewards loyalty but then ends the sketch palling around with U.S. Senate Minority Leader Chuck Schumer.

Trump was also a target on the show’s “Weekend Update,’’ with Colin Jost pointing out that hip-hop artist Pitbull was sending a private plane to help victims in Puerto Rico. “How is the president of the United States worse at humanitarian aid than Pitbull?’’

Michael Che also got into the act: “This isn’t that complicated, man. It’s hurricane relief. These people need help. You just did this for white people twice. Do the same thing. Tell Melania to put on her flood heels.’’

Musical guest Jay-Z had his own political statement when he wore Colin Kaepernick’s jersey number, a nod to the football player’s decision to kneel during “The Star-Spangled Banner’’ last season.

The comedy show hopes to build off one of its most-watched seasons in more than two decades thanks to Baldwin and Melissa McCarthy’s appearance as former White House press secretary Sean Spicer.

Both actors recently won Emmys for their work, as did Kate McKinnon, who played Hillary Clinton on the show, and on Saturday played Sessions and Angela Merkel, the chancellor of Germany. AP