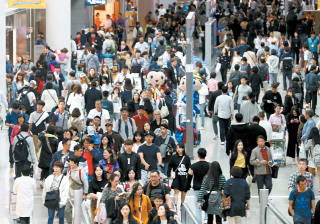 With the number of Koreans traveling abroad increasing sharply every year, so has overseas credit card spending, which reached a record high last year, according to new data from Korea’s central bank.

Credit card spending outside of the country last year totaled $14 billion, an increase of 7.5 percent from 2015. The amount has been growing gradually over the past five years, with overseas credit card spending in 2012 making up just half of what it was last year.

As a result, the number of people spending with plastic overseas has exceeded 10 million for the first time, a sharp increase from 2012 when only half a million Koreans used their credit cards abroad.

Last year, 22 million Koreans traveled outside the country, according to Korea Tourism Organization, compared to 13 million in 2012. Especially in the past two years, the figure has seen double-digit growth, with foreign travel rising 16 percent last year and 20 percent in 2015.

The study on credit card spending was released Monday by Park Kwang-on, a Democratic Party lawmaker on the National Assembly’s Strategy and Finance Committee who obtained the data from the Bank of Korea.

The study showed that a majority of people who spent small amounts during their trips used their own credit cards, while bigger spenders mostly used corporate cards.

Credit card spending is expected to increase further this year. Data from Incheon International Airport on Sunday showed that the number of Koreans who left the country on Saturday alone amounted to more than 114,000, an all-time high for a single day.

Saturday began a 10-day vacation for many Koreans as they celebrate Chuseok, one of the country’s biggest holidays. The tourism industry estimates that over a million Koreans will travel abroad for the holiday.

The previous daily record at Incheon International Airport was on July 30 this year, when more than 109,900 Koreans departed for summer vacation.