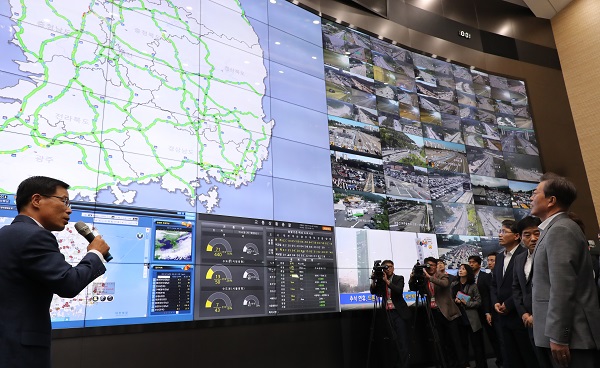 President Moon Jae-in, far right, is being briefed about real-time traffic information at the Traffic Information Center in Seongnam, Gyeonggi, on Monday. [YONHAP]

President Moon Jae-in delivered traffic information on Monday as many Korean families headed to their hometowns to celebrate the Chuseok holiday.

Moon visited the traffic information center in Gungnae-dong, Seongnam, Gyeonggi, in the morning and worked briefly as a daily traffic correspondent. He broadcasted real-time traffic information for the highways and reported that highway tolls are free during the three-day Chuseok holiday season from Oct. 3 to 5. This year’s Chuseok falls on Oct. 4.

“Eight out of ten people visiting hometowns are driving, and the most dangerous factor during a long road trip is sleepiness,” Moon said. “The best solution for sleepy drivers is to rest. Visit rest areas and take a moment when you feel tired. And when you get back on the road, don’t forget to buckle up your seatbelts.”

Moon also expressed his appreciation to bus and taxi drivers as well as railway, airline and maritime industry workers for working during the holidays.

Many Koreans will enjoy a 10-day break this year, as the government designated Oct. 2 as a temporary holiday, bridging the Sept. 30 weekend to the three-day Chuseok holiday. Oct. 6 is an alternative holiday for National Foundation Day, followed by another weekend. Oct. 9 is a public holiday commemorating the Korean alphabet, hangul.

The president also issued a message to celebrate Chuseok. “I hope the people will take a rest from their daily lives and have a happy and comfortable Chuseok holiday,” he said. “The government will do its best to support the people’s safe trips to their hometowns.”

Asked about his holiday plans, Moon said he will hold ancestral rites at the Blue House. “I feel a little sad because I cannot visit my hometown and my family graves,” Moon said. “This holiday period is long, so I will do some work that needs preparation and also take a lot of rest.”

According to the Blue House, it originally planned an event for Moon to visit the broadcaster’s studio in Seoul, but Moon wanted to visit the traffic information center near the highways.

Before making the broadcast, Moon was briefed by the head of the traffic information center about its operations. He also shook hands with about 20 workers at the center.