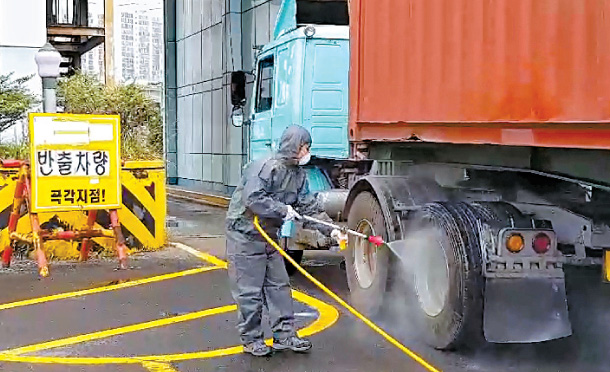 A staffer from the Animal and Plant Quarantine Agency handles quarantine efforts at Kamman Terminal in Busan on Sunday after over 1,000 red fire ants were found at the container yard. [YONHAP]

An infestation of venomous fire ants was found in the southern port city of Busan, prompting alarm among authorities.

It was the first time Solenopsis invicta, also known as red imported fire ants, was found in Korea.

Around 1,000 of the ants were discovered at a container yard in Kamman Terminal, Busan, last Thursday and Friday. 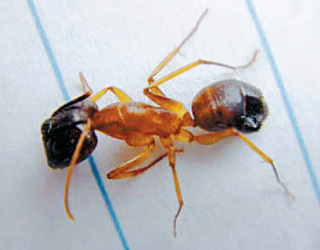 An image of a red imported fire ant discovered in Guangdong Province, China, in 2005. [YONHAP]

The agency quarantined the affected area and had yet to find a queen fire ant. The queen can lay from 1,500 to 5,000 eggs per day.

The ant’s bite releases venom that leaves a burning sting and in some cases can be life-threatening if there is an allergic reaction. The ants can cause huge economic and environmental losses if the insects invade crops.

The red imported fire ant is among the world’s top 100 invasive alien species designated by the International Union for Conservation of Nature.

“We are working to find a queen ant as we are taking preventive measures,” said a spokesperson for the Animal and Plant Quarantine Agency on Monday.

The authorities speculated that the insects arrived with cargo, though the exact cause has yet to be determined.

“Since the Busan Harbor is a place where large volumes of imported goods come, it is vulnerable to the entrance of exotic pests like the red imported fire ants,” said Woo Ye-jong, president of Busan Port Authority.

“We will make efforts to fundamentally eradicate the infestation,” the head said.

State agencies will run an emergency monitoring system through the Chuseok holiday, which runs through next Monday.

Ever since the insect was reported to have been found in Japan in June, the quarantine body has stepped up monitoring for the ant.

“Since Japan was hit by the fire ants, we tightened monitoring,” Kim said, “In the process, we came to find the nest.”

Japan’s authorities struggled to contain swarms of fast-breeding red ants this summer. They were found in ports in Kobe, Osaka, Nagoya and Tokyo.

In the early 2000s, the ants struck Australia, where farmers were hit especially hard.

The Australian government recently agreed to spend $411.4 million over the next 10 years to eradicate red imported fire ants.

Last month, a fire ant attack on a Florida man while he was driving caused the 85-year-old to overturn his SUV on a highway.

Being native to South America, the ants are thought to have caused dozens of deaths in the United States.

The species can wreak havoc in countries that are heavily dependent on agriculture. The ants could wipe out some native animals by feeding on them.