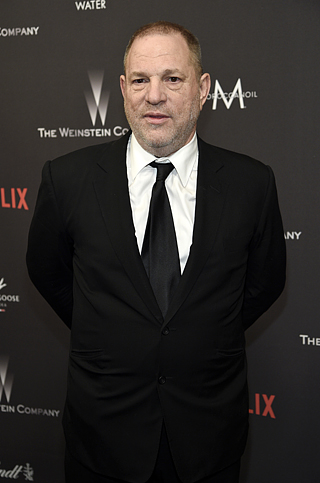 Harvey Weinstein is on indefinite leave from his film company pending an internal investigation into sexual harassment claims leveled against the Oscar winner. [AP/YONHAP]

LOS ANGELES - A prominent attorney said Saturday she is no longer representing movie mogul Harvey Weinstein as he confronts sexual harassment allegations dating back years, while a TV news anchor lodged another claim of misconduct against the movie mogul and a third board member resigned from Weinstein’s company.

The developments, along with the departure of yet another lawyer for Weinstein, are the latest fallout from allegations against the Oscar-winning producer that The New York Times detailed in an expose Thursday.

“My understanding is that Mr. Weinstein and his board are moving toward an agreement,” attorney Lisa Bloom said in announcing her resignation on Twitter.

Bloom didn’t respond to an email request for further comment. She previously has represented victims of sexual harassment and assault. Her work with the co-chair of The Weinstein Co. drew fierce criticism online. Bloom is the daughter of well-known Los Angeles women’s rights attorney Gloria Allred.

Charles Harder, another attorney representing Weinstein, didn’t immediately reply to a request for comment on the developments. A Weinstein Co. spokeswoman, Nicole Quenqua, declined to comment.

Lanny Davis, a lawyer who also was working with Weinstein, is no longer advising the producer, said a person familiar with the situation who was not authorized to speak publicly.

President Donald Trump, preparing to board a helicopter to travel from the White House to a North Carolina fundraiser on Saturday, was asked by reporters to weigh in on the embattled Hollywood figure. “I’ve known Harvey Weinstein a long time,” Trump replied. When asked if he was surprised by the accusations, the president replied: “I’m not at all surprised to see it.”

Trump brushed off a query about his 2005 “Access Hollywood” tape comments, in which he bragged about women letting him kiss them and grab their genitals because he is famous.

“That’s locker room,” he said, echoing his characterization of the remarks after the audio was revealed during last year’s presidential campaign.

The allegations of sexual misconduct against Weinstein were detailed in a report this week by The New York Times. Weinstein is on indefinite leave from the company he co-founded while it conducts an investigation into the claims made by women including actors Ashley Judd and Rose McGowan and stretching back years.

TV anchor Lauren Sivan added to them, detailing an alleged 2007 encounter with Weinstein in a HuffPost report Friday. Sivan, then working at a New York cable channel, Long Island 12, alleged that Weinstein cornered her in the hallway of a Manhattan restaurant closed to the public and masturbated in front of her.

Sivan said she had rejected an attempt by Weinstein to kiss her. “Well, can you just stand there and shut up,” she claims he responded.

Sivan, who is now a reporter and host for Fox broadcast TV’s Los Angeles station, Fox 11, didn’t immediately respond to a request for comment. But she reaffirmed the HuffPost report on Twitter.

“Yeah. This happened. luckily I didn’t need a job or favor from him + didn’t have to be polite. Others did. Keep that in mind,” she tweeted, then followed up with a second post: “For those asking why I waited? YOU try telling that story 10 yrs ago. Only possible now because of women with bigger names far braver than me.”

The scandal’s fallout included the resignation of Weinstein Co. board member Marc Lasry, chairman and CEO of Avenue Capital Group, which was confirmed Saturday by a Lasry spokesman, Todd Fogarty. Lasry joined an exodus from the nine-member board, with billionaire Dirk Ziff and, according to reports, Technicolor executive Tim Sarnoff also leaving.

On another front, “Morning Joe” co-host Mika Brzezinski tweeted that “unless Harvey resigns” she will withdraw from a three-book deal she struck last summer with Weinstein Books.

Weinstein has exerted power in Hollywood for three decades, producing films including “Pulp Fiction” and “Shakespeare in Love,” for which he won an Oscar. But his stature has diminished in recent years and his company has suffered from a string of executive exits, layoffs mounting lawsuits and delayed releases.

The New York Times chronicled allegations against Weinstein from Judd and former employees at both The Weinstein Co. and Weinstein’s former company, Miramax, over several decades. The report made an enormous impact felt throughout the movie industry and elsewhere.

The board of directors has pressured Weinstein to step down from the company he helped create, said a person familiar with the board’s deliberations who was not authorized to speak publicly. Weinstein has resisted, hoping to weather the storm. Discussions between Weinstein and the board have been heated and contentious, the person said.

Leadership of the Weinstein Co. will be assumed by Bob Weinstein, who is Harvey Weinstein’s brother, and David Glasser, the company’s chief operating officer.