A travel agent with a 24-carat client roster

A travel agent with a 24-carat client roster 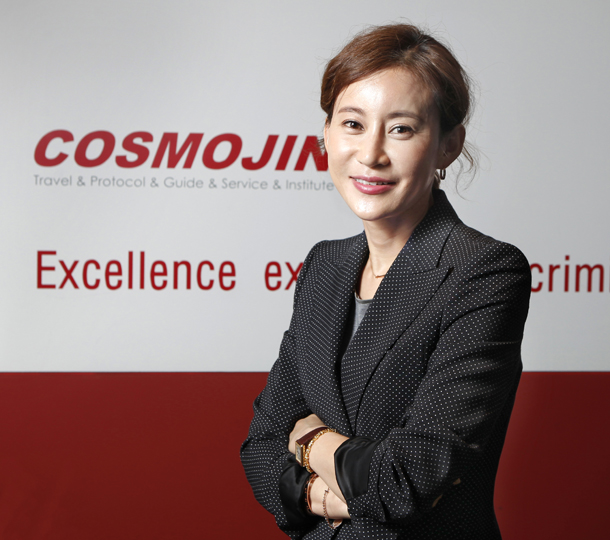 That jaw-dropping list of globally renowned figures have only one thing in common aside from fame: they share the same travel agency in Korea.

Seoul-based Cosmojin Travel Agency is a unique entity in the local tourism industry. It specializes in taking care of high-profile visitors from overseas - mostly on business - from their arrival at the Incheon International Airport to their departure.

The force behind the company is Jung Myung-jin, founder and CEO. The 45-year-old, who also goes by the English name Jinny, landed a job in the international conference industry in 1997 after earning a degree in tourism in Seoul and taking a hospitality course at Tafe College in Sydney. 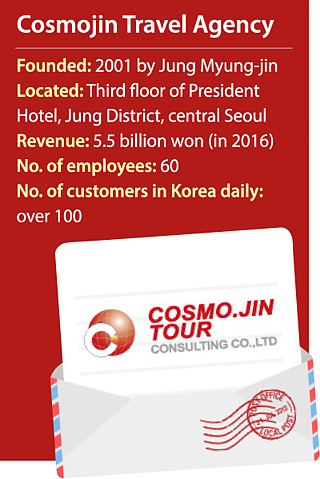 She launched Cosmojin in 2001, after spying the upbeat potential of a business that combined hospitality, conventions and concierge services.

The company has recently faced the unexpected challenge of escalating military tension on the Korean Peninsula. Her clients, of whom 70 percent are corporate, are growing reluctant to visit Korea, let alone the demilitarized zone, usually a prime attraction for foreign tourists.

“Many of my clients have cancelled trips to Seoul in the past several weeks and I managed to make ends meet in September,” she said in a recent interview with the Korea JoongAng Daily at her office at the President Hotel in central Seoul. “But I can’t guarantee the following months should any emergency situation break.”

Cosmojin has barely been affected by economic retaliations that Beijing is taking for Seoul’s deployment of an American anti-missile system. It is cracking down on group tours from China to Korea, but Cosmojin caters to individual travelers.

The CEO noted, however, that Korean tour agencies should be much more nimble in catching up with changes in Chinese travelers’ tastes and improve the quality of the experiences they offer.

She also revealed the shocking fact that up to 40 percent of her potential clients have given up trips to the 2018 PyeongChang Winter Olympics due to uncertainties about accomodations.

“That’s such a shame and a loss for Korea,” she said bitterly.

Contrary to expectations, Jung is not much of a traveler and is more into developing ideas that will make certain travel destinations more meaningful.

“When job applicants tell me during interviews they love traveling or celebrities, I don’t hire them,” she said, “because they are supposed to be more into serving clients.”

Jung’s company has been seeing moderate revenue growth in the past few years of five to 10 percent annually, which compares to up to 30 percent in earlier years. Jung thinks merging with a more powerful company in a related industry - such as an entertainment agency - could create synergy and revitalize the business. SM Entertainment acquired BT&A, a listed travel agency, in 2012.

“It would be nice if we could find the right merger and acquisition partner next year or two years later,” she said. “Over the longer term, I would like to specialize in personal concierge services for foreign visitors based on the resources that have piled up thus far.”

Q. What would be the typical trip for VIPs?

A. What’s common among them is the first place they want to visit is the demilitarized zone. Even those visitors who have tight schedules here are eager to stop by the area. The reaction I usually get from them after the visit is they are surprised to find it so peaceful, even though it’s only an hour ride from Seoul.

Then we take the tourists to North Korean restaurants including one in Insa-dong, run by a North Korea-born person, and to the Seoul Museum of History - a comprehensive course to show them the past, present and future of both Koreas.

People from the United States and Europe like the Korean side of the market. But our corporate clients in Korea who invite visitors don’t particularly love the place because they prefer showing the advanced side of Korea.

Do tourists from different countries have different preferences?

They have named Lotte World Tower, which opened in April, as one of the destinations they would like to visit and some rather obscure places that were featured in Korean dramas aired in their countries.

American and European tourists tend to enjoy visiting traditional Korean places such as palaces and Insa-dong. For the Middle Eastern tourists, finding halal restaurants - either at the Lotte Hotel or in Itaewon - and keeping prayer time is critical.

They also don’t like tight schedule. We just come up with a few proposals for the day under a certain theme such as medical checkups and they choose. They like to have their health checked at Korean general hospitals because we offer cheaper, faster and precise services.

An increasing number of Middle Eastern tourists are treated for fertility issues. I am surprised to find that many return to Korea with their families after visiting here on a business trip.

We have clients from Equatorial Guinea, Gabon and Swaziland. They are very demanding - probably 10 times more than Chinese - and are reluctant to change their own rules. But once we open a business with them they tend to be loyal. They are also flexible about food.

Do you have VIPs from Japan?

It’s interesting that we only have a few VIPs from Japan, who mostly consist of maniacs about Korean pop culture. Most recently, my employees had to sit up late to buy tickets for a Big Bang concert over the internet because our clients couldn’t get access to Korean ticket sites. But most Japanese know Korea too well to need my service.

Do you think hallyu (the Korean wave of pop culture exports) will persist?

It looks like it is already losing steam. For instance, when I visited Hong Kong last April, the atmosphere was already different compared to the previous December. Back then, I saw photos of hallyu stars everywhere and five months later I could barely find any. I think the government and private agencies should work together to come up with quality products while we still have this nice tourism draw called hallyu.

As a close observer, how do you think preparations for the PyeongChang Winter Olympics are going?

Travel agencies are powerless now. We can do nothing about the transportations and accommodations of course. Winter Olympics are quite prestigious, I realize as I deal with my clients these days. A lot of people with wealth and high social status in Europe and the United States are quite interested in the games, with a sizable portion being absolute maniacs.

The fans are different from those for the summer Olympics or the World Cup. Their standard is extremely high. And there are no high quality accommodations available for my clients, and bookings for other kind of hotels will only open in October.

(Intercontinental Alpensia Pyeongchang Resort, the only five-star hotel in the area, is fully booked for organizing committee members, government officials and athletes, according to the organizers.)

I have told many of my clients that they have no choice but to go back and forth between Seoul and the game venues, which are spread across Gangwon. They are skipping the opening and closing ceremonies due to the long travel time.

I get contacted by a lot of sports agencies abroad for their clients who want to go to the games but up to 40 percent have already given up visiting Korea due to the “uncertainties” with just four months left before the Olympics kick off. That’s such a shame and loss for Korea.

What part of Korea’s tourism policies do you think need a serious upgrade or fix?

It is regrettable that the Ministry of Culture, Sports and Tourism, the Korea Tourism Organization, the Seoul Metropolitan Government and other local governments all have different voices. There is no streamlined promotional channel or voice among them. Foreigners may recognize elements about Korea such as Samsung Electronics and North Korea but not many of them have any idea about what to do here and where to find proper information.

We would love to join forces with government agencies to develop content and share the know-how we have built thus far.

I wish the government would approve exceptions for special guests. When Google’s Eric Schmidt wanted to take a tour of the Joint Security Area, I asked the South Korean military authorities to make the zone private for a while. But it insisted it would not allow such an exception. We finally got a nod from the United Nations through the U.S. army.

I also think Incheon International Airport should allow passengers flying first and business class to use the Fast Track immigration lanes, which are available at many leading international airports. (Fast Track lanes in Incheon are restricted to diplomats, holders of the CIP (commercially important person) cards, the disabled, children, elderly and pregnant women.) Many VIPs and celebrities from abroad were aghast at the fact that they were not allowed to use the priority lane at Incheon.

For foreign visitors, airports are their first impression of a country and the Korean government should be quick to overhaul the policy.

What are the most crucial qualities for your employees to have to serve VIPs?

They have to be extremely versatile and talented. They should be good at foreign languages, hospitality and planning. They also need to be nimble because they must be able to come up right away with the names of restaurants when a client asks for a certain dish.

What are the greatest risks your company faces?

North Korea, definitely. It wasn’t this hard even after the second battle of Yeonpeyong (an artillery engagement at sea between the two Koreas in 2002). But the situation completely changed since North Korea raised the level of threat with nuclear and missile tests recently.

Many of my clients have cancelled trips to Seoul in the past several months and I could manage to make ends meet in September but I can’t guarantee the following months should any emergency situation break. The situation with China, contrary to general expectations, didn’t really affect us.