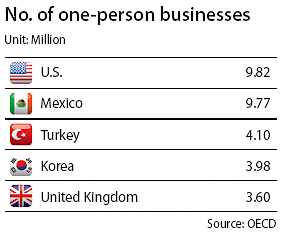 Korea ranks fourth among members of the Organisation for Economic Cooperation and Development for the number of one-person businesses operating in the country, with nearly four million people working alone.

According to the OECD report published on Sept. 28, entitled “Entrepreneurship at a Glance,” Korea has 3.98 million self-employed people who run their businesses without hiring employees to help them, coming in fourth place among the 38 surveyed nations.

The report shows that in the category of “own account workers,” a reference to those who run their businesses without employees, the United States tops the list with 9.82 million, followed by Mexico with 9.77 million and Turkey with 4.1 million. Coming in fifth is the United Kingdom, which has 3.6 million solo entrepreneurs.

The fact that Korea came in fourth in the number of one-person businesses among OECD member states is seen as a sign of a growing trend among retiring baby boomers, born between 1955 and 1963, who find opening mom-and-pop stores a viable retirement option without paying someone to help their businesses.

By population, roughly 7.7 percent of Koreans run one-person businesses, higher than the other countries in the top five.

Across all 38 surveyed nations, the number of male CEOs running solo enterprises was higher than female CEOs, with the single exception of Switzerland, where the number of female and male CEOs was the same.

For Korea, the number of male CEOs was 2.77 million, almost double the 1.21 million businesswomen without employees.

The gender gap on entrepreneurship in Korea is evident in the OECD report. While there are 1.2 million male employers, only 378,000 women are running businesses with employees on the payroll in Korea.

The OECD report states that 70 percent or more of self-employed women in a majority of OECD economies work “predominantly in the service sector” and mostly on their own rather than as employers. The study also found that it is “two and a half times more likely” for men to run businesses by employing others than women.

The OECD report found that “low or erratic earnings” is one key reason why many people are unwilling to consider entrepreneurship.