‘Only one thing will work,’ says Trump

‘Only one thing will work,’ says Trump 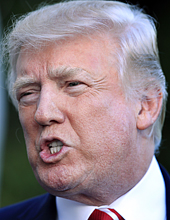 U.S. President Donald Trump said on Twitter on Saturday that “only one thing will work” in dealing with North Korea.

Criticizing the past diplomatic approach to the regime, he wrote: “Presidents and their administrations have been talking to North Korea for 25 years, agreements made and massive amounts of money paid ... hasn’t worked, agreements violated before the ink was dry, making fools of U.S. negotiators. Sorry, but only one thing will work!”

This follows Trump’s remarks to White House reporters during a gathering with top U.S. military leaders Thursday evening, in which he warned of “the calm before the storm.”

When a reporter asked what he meant by “storm,” Trump winked and replied, “You’ll find out.”

“We’re continuing to put maximum economic and diplomatic pressure on countries like North Korea,” White House Press Secretary Sarah Huckabee Sanders said on Friday when asked in a press briefing about Trump’s “calm before the storm” remark. “We’re going to continue to do that.”

She added, “But at the same time, the president is going to keep all of his options on the table,” pointing out that the White House position “has not changed” and has been “very consistent.”

When asked if the president was referring to North Korea, Sanders replied, “I’m just using that as an example. I think we’ve got a lot of bad actors in the world - North Korea, Iran.”

Regarding his “You’ll find out” remark, Sanders said, “He didn’t talk about any specific actions at all,” adding, “We’re not going to announce what actions we’ll be taking until that moment comes.”

Sanders also responded to whether Trump is employing the “madman theory” to keep his adversaries off balance, saying, “I wouldn’t say necessarily that he’s trying to throw people off, but he’s not trying to broadcast or telegraph his exact actions.”

She continued, “I think we’ve seen what a failure it is when an administration does that, and this is a president who’s going to do it differently and do it better.”

On Oct. 1, Trump shot down State Secretary Rex Tillerson’s diplomatic efforts, claiming on Twitter that he was “wasting his time trying to negotiate with Little Rocket Man,” in reference to North Korean leader Kim Jong-un. He continued: “Save your energy Rex, we’ll do what has to be done!”

The previous day, during a trip to Beijing ahead of Trump’s planned trip to the Asia region in November, Tillerson had told reporters that Washington had multiple, direct open channels for communicating with North Korea.

This includes the New York channel, since Washington and Pyongyang do not have official diplomatic ties. The state secretary’s remark led to speculation that Washington may have a new diplomatic approach to North Korea.

Tillerson also said, “We are probing” to see if North Korea is interested in dialogue with Washington. He added that Trump “has issued no red lines” on what would elicit a military response against the North.

In a statement later that day, the U.S. State Department said, “North Korean officials have shown no indication that they are interested in or are ready for talks regarding denuclearization,” undercutting the possibility of dialogue with Pyongyang.

Friction between the president and his state secretary escalated last week as NBC News reported Wednesday that Tillerson had referred to the president as a “moron” in a meeting with Trump’s national security team and Cabinet officials at the Pentagon in July, and had been on the verge of resigning this past summer.

Tillerson said in a press conference later Wednesday he had never considered resigning from his post. Trump likewise said he has “total confidence” in Tillerson, despite such reports.

But Republican Sen. Bob Corker of Tennessee, chairman of the U.S. Senate Foreign Relations Committee, told reporters in Washington on the same day that Tillerson, Defense Secretary James Mattis and White House Chief of Staff John Kelly are the “people that help separate our country from chaos.”

Corker was critical of Trump for undermining Tillerson’s diplomatic efforts regarding North Korea, stating, “He ends up not being supported in the way I would hope a secretary of state would be supported ... trying to solve many of the world’s problems without the support and help I’d like to see him have.”

Trump is scheduled to take a trip to China, Japan and South Korea next month. North Korea may be preparing to test a long-range ballistic missile capable of striking the U.S. West Coast, according to a Russian lawmaker who visited Pyongyang last week.

Anton Morozov, a member of the Russian lower house of parliament’s international affairs committee, was quoted by Russia’s state-run RIA news agency Friday as saying North Korea is preparing for a long-range missile test “in the near future” and that officials provided mathematical calculations that supposedly show their missile can hit the U.S. West Coast.

South Korean and U.S. military forces have been stepping up reconnaissance operations to counter the North’s possible provocations, according to the South Korean military official, to maintain preparedness over the 10-day Chuseok holiday.

An Aegis-equipped destroyer deployed in the East Sea and the land-based Green Pine radar are also tracking any missile movement by the North.

The officials said, “Some movements have been continuously detected from the North’s missile facilities and bases.”

Observers point out that North Korea may conduct an act of provocation, including launching an intercontinental ballistic missile around Oct. 10, coinciding with its ruling Workers’ Party foundation day.