Man arrested for dumping corpse of a girl

Man arrested for dumping corpse of a girl 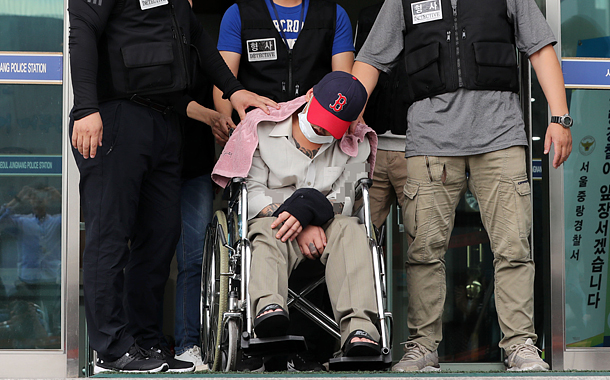 A 35-year-old man, who is accused of killing his daughter’s friend, is taken in a wheelchair to the Seoul Northern District Court on Sunday. [YONHAP]

The Seoul Northern District Court issued a detention warrant on Sunday for a 35-year-old man surnamed Lee, charged with killing his daughter’s 14-year-old friend on Oct. 5 and dumping her corpse on the side of a mountain.

The victim went missing on Sept. 30 after she received a call from Lee’s daughter and went to his home. She was not seen again, and the next day, Lee and his daughter left for Gangwon Province.

Police arrested Lee at his home in Dobong District, eastern Seoul, last Thursday, where he was found to have overdosed on sleeping pills along with his daughter. They were both hospitalized and survived.

While questioning Lee, police learned the location of the girl’s body, which had been dumped in Yeongwol County, Gangwon.

It was recovered last Friday.

Police also found a tablet PC, on which Lee had filmed himself claiming the girl had accidentally swallowed sleeping pills during her visit to his house and that he dumped the body because he panicked.

But the victim was strangled to death, the National Forensic Service reported last Saturday.

Lee, who was friends with the girl’s father, admitted to dumping the body but denied murdering the girl.

He was summoned on Sunday, three days after his arrest, by Jungnang police, where he was interrogated for three hours. Upon exiting the interrogation room, Lee refused to answer any questions.

Lee had appeared in the media around 2006 due to a genetic disorder he had, “gigantiform cementoma,” a hereditary tumor that causes disfigurement of the jaw and teeth.

After numerous surgeries, he was left with only one molar tooth, earning him the nickname “Molar Father.”

After appearing in the media with his daughter, who has the same condition, they had received donations for surgery, and published a book.

Lee’s late wife, who committed suicide on Sept. 5, was revealed to have been in a lawsuit against one of Lee’s family members for sexually assaulting her. Police had been investigating Lee for domestic violence.