The funeral of Kim Un-yong, the former vice president of the International Olympic Committee, was held at Kukkiwon, the headquarters of World Taekwondo in Seoul, Monday morning. 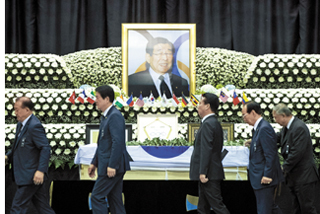 Visitors pay their respects to Kim Un-yong, the former vice president of the International Olympic Committee, at his funeral in Kukkiwon, the headquarters of World Taekwondo in Seoul, on Monday. [YONHAP]

Kim passed away on Oct. 3 at the age of 86. Sources close to the deceased said Kim, feeling under the weather, was admitted to Severance Hospital on Oct. 2 and pronounced dead at 2:21 a.m. the next morning.

During his sports administration career, Kim was one of the most powerful figures in the IOC, which he joined in 1986. He played an instrumental role in helping Seoul win the right to host the 1988 Summer Olympics.

He is also credited with helping set up the joint march by the South and North Korean athletes at the opening ceremony of the 2000 Sydney Summer Games.

In 2001, Kim waged an unsuccessful campaign for the IOC presidency, losing to Jacques Rogge 59-23.

The latter part of Kim’s career was marred by a series of corruption allegations and a conviction in his native country.

In 1999, Kim received “the most serious” warning from the IOC in connection with the scandal surrounding the 2002 Salt Lake City Olympics. An IOC probe concluded that the bidding committee for Salt Lake City had helped subsidize the work of Kim’s son, John, with a local company, and that the senior Kim had used his clout to schedule piano performances for his daughter with the Utah Symphony.

In 2004, Kim was arrested and later convicted on bribery and embezzlement charges in Seoul. The Supreme Court here upheld the ruling from lower courts in early 2005. Kim resigned from the IOC in May 2005 rather than face an expulsion vote by IOC members.

But he didn’t stop pursuing his lifelong career in sports.

Last November, he established the Kim Un Yong Sport Committee to work toward sports development and enhancement in Korea. This year’s Kimunyong Cup International Open Taekwondo Championships are scheduled for Oct. 28 to Nov. 1 in Seoul.

A biographical book on Kim will be published soon by the Korean Sport & Olympic Committee. Kim worked together with the committee on the book until recently.

He was last seen in public at the opening ceremony of the National Training Center in Jincheon, North Chungcheong, last Wednesday.

He is survived by his wife, son and two daughters.