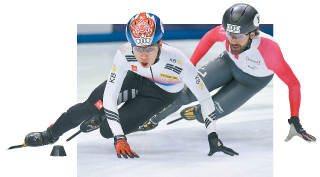 Choi Min-jeong, who won three gold medals at the first World Cup race, added another gold in the women’s 1,500-meter race by finishing the race at 2:31.334. However, that was the only race Choi won, as she failed to advance to the final race in the women’s 500-meter after being penalized for rough play while jostling for her position with Fan Kexin of China.

Fan’s name is familiar among followers of Korean short track, as Shim Suk-hee was penalized in the women’s 500-meter race after grabbing Fan’s hand at the 2017 Sapporo Asian Winter Games in February.

Shim won her first individual gold of the season by winning the women’s 1,000-meter race with a time of 1:29.282. The 2014 Sochi Olympics gold medalist was dominant in 1,000-meter, as she finished first in every race leading up to the finals.

Unlike the first World Cup, where Choi swept the event, Korea’s women came out strong to medal in all events. Along with Shim, Lee Yu-bin, the youngest skater on the national team, won her first medal on the senior stage with a bronze in the 1,000-meter, finishing the race with a time of 1:29.653.

The women’s team failed to grab another gold in the 3,000-meter relay by finishing second, only 0.042 seconds behind China.

However, during the men’s 5,000-meter relay race, Hwang suffered a minor injury after getting tangled up with Seo Yi-ra. Though the injury won’t affect the skater’s season, the national team members are wary to avoid getting hurt, as the Olympics are less than four months away.