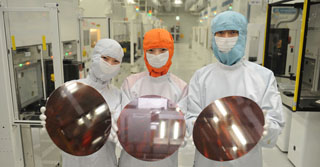 There were times when Hynix was tossed around like a hot potato by creditors, with some grumbling they would all be better off if the chipmaker went under. Creditors were relieved to hand over the company to SK Group in 2012. Little did they imagine that their headache would make a stunning turnaround to become lucrative and confident enough to bid for Japan’s Toshiba, the pioneer in NAND flash memory.

Hynix has faced crises every 10 years, timed with cyclical slumps in the chip and PC industry. Hynix, formerly Hyundai Electronics, was on the brink of bankruptcy after being forced to merge with LG Semiconductor, of LG Group, in government-led restructuring after the Asian financial crisis in late 1997. It was also rocked during the global financial crisis in 2007-2009.

The chip and PC industry hinges heavily on the global economy. Hynix, whose mainstay has been the dynamic random access memory (DRAM) chips that go into PCs as they require power to store memory, could not afford new investment as its operating losses stretched to billions of dollars. Yet, capital investment was essential to stay in the semiconductor business as its competitiveness is determined by the capacity to churn out more chips from a single wafer through innovative designs and technology.

Creditors became frustrated by pouring money into a bottomless pit. Media at home and abroad suggested the Korean economy and global industry would be better off without Hynix. For its international competitors, one fewer player meant reduced supply and an improvement in chip prices.

That was how the once-dominant players of the United States and Japan all fell and went extinct in the semiconductor industry, where only strong and fast movers can survive. A highly concentrated and complex chip technology underlies the quintessential strengths of Koreans — persistence and craftsmanship. As they could not afford new equipment, Hynix engineers renovated existing facilities.

A new fab costs about $1 billion. Again, since they did not have the money, Hynix in 2004 redesigned the M5 fab in just five months. Hynix’s cost-saving method of keeping up with the technology and competition has become legendary.

The “Saving Hynix” operation was a success thanks to all the employees who willingly put up with being underpaid for years and the patient commitment from creditors and shareholders.

The government forced creditors not to sell or give up on Hynix. LG Group never forgave the government and the Federation of Korean Industries that mediated the so-called big deals among chaebol. Korea Exchange Bank, which was the main creditor of Hynix, never recovered and eventually had to be merged into Hana Group.

All the corporate upheavals were behind the history of Hynix. It made it stronger. The chipmaker that used to lose 5 billion won ($4.36 million) a day during its worst years earned 30 billion won a day in the second quarter this year. In 2014, it happily paid corporate tax for the first time in 19 years after finally seeing black figures in its income statement. Since then, the company has paid 2.3 trillion won in taxes.

Hynix has been the embodiment of Korea Inc. in its bold entry into the cutting-edge industry and fearless investment and development. All the surviving conglomerates have gone through the tumultuous growing-up pains. SK Hynix has become wise from all its experience to know that there is no lasting winner in the cruel technology world.

The ruling Democratic Party labels the chaebol legacy as the remnants of Park Chung Hee dictatorship and demands reform. But no country can do without enterprise, especially those with a hard-won international reputation.