Women look to break out of their digital prison: Providing options to victims of illegally distributed sex tapes

Women look to break out of their digital prison: Providing options to victims of illegally distributed sex tapes 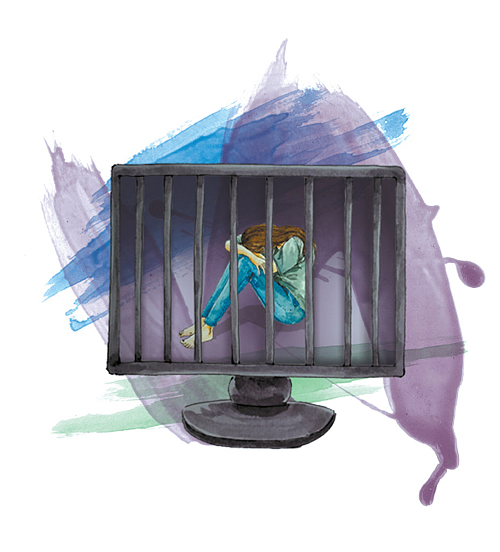 She looked down at the river below her feet, took a deep breath and closed her eyes. Her trembling fingers let go of the railing as she threw herself towards the cold water, praying that this miserable day would be her last.

When 30-year-old Kim was a college student, she shot videos of herself and her boyfriend making love, agreeing that they would be the only ones to watch the clips and that neither of them would post the files anywhere on the internet. Their promise was no use, though, after they left their memory stick at the library and it was stolen. Although she was devastated that the footage could end up on the internet, she slowly forgot about the incident because neither she nor her boyfriend came across the videos online.

A few years later, after Kim passed the national teacher’s exam, she got a job at a middle school in Jamwon-dong, a region in southern Seoul not far from the Han River. Her life seemed to be going smoothly, with a steady job and a loving boyfriend. Then, shortly after she started as a teacher, her principal called her to his office and told her that she could not work at the school anymore - the boys of the school had seen her in “a number of pornographic videos.”

She couldn’t face her students back in the classroom, nor make her way to the teachers’ office and confront her colleagues, so she headed straight to the Han River and jumped. 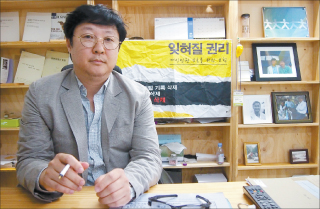 Kim Ho-jin, head of Santa Cruise Company, Korea’s first “digital undertaker,” explains the pain those victimized by sex videos go through after finding footage of themselves online. Kim sits in front of a sign that reads, “The Right to be Forgotten.” [YOON SO-YEON]

“She’s living at her parent’s house, after she lost her job and her boyfriend,” said Kim Ho-jin, president of Santa Cruise Company. “Since then, she has attempted suicide a few times, none of which were successful. Now, she’s living on meds and can’t go out of the house. We talked to her through the phone.”

Kim is one of the many clients who have come to Santa Cruise Company for help. The “online reputation management company” run by Kim Ho-jin specializes in removing content from the internet ranging from comments and social media posts, to photos and videos. Until 2008, Santa Cruise was an ordinary casting agency which connected celebrities and advertising companies, but that all changed when a 12-year-old model refused to go to school or shoot another commercial because of malicious comments she had seen online. The company started to focus on deleting aggressive comments towards individuals and companies, and in 2013, got a patent for their methods to become the first professional “digital morticians” in Korea, as they are called by the public.

According to Korea Communications Commission (KCC), the number of people filing requests for their sex videos be deleted from the internet was 958 in 2012, but that number rose to 7,325 last year - 98 percent of which were from women.

“When they come to us, they look as if they’ve given up on everything, even their lives,” said Kim. “I feel every bit of the clients’ pain. Because the unfortunate thing about the digital space is that every file that exists online is susceptible to an infinite amount of copies. So, from the moment a client realizes that their photo or video has been posted online, they suddenly confront an infinite number of files of themselves that they can’t handle on their own.”

Through the internet, illicit material is easily accessible in Korea, but the law prohibits the production and circulation of all kinds of pornography in the nation. The distinction between pornography and legal nudity in a movie is based on the full exposure of the genitals. If the scene isn’t blurred and the angle is straight-on, the footage is pornography. The distribution of content featuring fully exposed genitals can lead to a prison sentence of up to five years or a fine of up to 10 million won ($8827).

Kim’s job, and the job of other so-called digital undertakers, is to monitor all of those sites 24/7, to make sure that they catch every one of the videos featuring their clients. Once they find the videos on the websites, they send a message to the site manager and request for the files to be deleted, and keep tabs on the site to make sure that the video is not posted again. If it reappears, then they request it be deleted again and again, until the video is completely removed from the website.

“It takes less than a day, even minutes, for the website manager to take down the file. But the same file might be uploaded again by a different user, so we have to monitor the sites all day, every day. So if we find 1,000 files on the first day, that number might be 2,000 or 10,000 the next day. We just don’t know. But if we keep deleting it, and keep a close eye, then there’s a moment when the number stays at zero,” said Kim. “The moment we inform the client of that news is the most rewarding thing for me.” For websites hosted by foreign servers, there’s nothing the digital undertakers can do directly, so they report the site to the KCC, and the site becomes blocked domestically.

“About five out of 100 women that come to us become unreachable,” continued Kim, “meaning that they’ve committed suicide. Their families pick up the phone instead. But that shouldn’t happen. There’s a solution. If you find yourself on the internet, don’t look for the files on your own. Come to us as soon as you find out, and that’ll be a start. You didn’t do anything wrong. Don’t lose yourself because of someone else’s crime.”

Deleting the videos is one thing, but taking legal action against the primary uploader is a much more complicated process. The KCC does delete the illegal videos for free in addition to blocking the websites, but since there are so many requests and government employees do not work all day, it may take months before any work is done. So when victims are forced to take their matters to private companies, it costs them over 2 million won a month, and at least two to three months until they can expect the footage to be totally scrubbed from the internet.

Fortunately on Sept. 25, the government released a set of plans to eradicate illegally uploaded videos, as well as expand the punishments faced by the initial uploaders. Those who upload the content will have to cover the expenses of erasing the videos from the internet, in addition to longer sentences and costly fines. Any profit earned by the uploader, or the website owners, through the video will be confiscated by the government.

A remaining challenge that victims face comes when they try to report their case to the police and press charges. To make their case “viable,” meaning that there is enough evidence to open an investigation, the victim must prove two things: that the video is actually of herself, and that the video contains illegal content. This ultimately requires that the victim provides police with scenes from the video that show her face and vagina fully exposed. This mortifying process is an essential part of gathering evidence.

“It’s like killing them twice,” said the head of the Korea Cyber Sexual Violence Response Center (also called “Cyber Lion”) who goes by the name Seorang. “We do the gathering for the victims, accompany them to the police station and provide them with psychiatric therapy afterwards.” Cyber Lion was founded in February by members who came together to take the matters into their own hands. Since the organization is a civil one and offers their services for free, the 18 members work other part-time jobs to make ends meet.

“One time, we went to the police station with the screen captures,” said Seorang. “But they told us to ‘give up because the evidence isn’t enough to catch the offender.’ There’s a victim who’s being abused, but we can’t accuse anyone of a crime that’s being committed. We get at least one or two reports every day, and only half of the actual offenders get caught. Even if they do, hardly any of them get punished.”

According to Seorang, the exact number of the victims or offenders cannot be counted, as new videos are uploaded daily on various platforms, many of which are based on foreign servers and cannot be tracked down. “One of the hardest parts of the job is when we find a video that is clearly of another victim,” said Yeopa, head of the operations team. “When the women look straight at the camera, it feels like they’re looking right at me, but there’s nothing I can do to help them.”

The legal system doesn’t help much, either. Posting illegal sex tapes can be deemed as sexual abuse, with a maximum sentence of up to five years, but nobody gets punished that severely, according to Seorang. The offenders usually get away with a fine of around 300,000 won to 500,000 won if it was the first time, and seldom more than 3 million won. Earlier this year, there was a case in which a man posted a video of himself and his ex-girlfriend having sex, but he was ruled not guilty of sexual abuse since the female in the video had allegedly agreed to filming.

There’s a long way to go, but the biggest step individuals can take is to take notice. By realizing that Korean pornography of any nature is illegal, and that the people in the video often suffer from a tremendous amount of pain after they discover the footage, everyone can contribute a little in stopping people from posting unwanted videos.

Trigger Point is a public PR company that recently finished crowdfunding for a campaign called “Unlock.” They achieved 407 percent more than their target amount, with over 20 million won collected as of Aug. 31, most of which they donated to Cyber Lion.

“We started the campaign because we saw how those victims were locked in their digital prison cells and could not break free from the torture,” said Kim Sang-woo, head of Trigger Point. “We want to help the victims come out of the screen and live their lives. We also want to let people know that what they’re watching is illegal, too.”

“You have to think of it as if it was a person you knew personally,” said Kim Sang-woo. “It leaves the individual powerless. The mental agony, the social damage and the self-hatred they have to feel - it may as well be a story of someone you take dearly to your heart.”