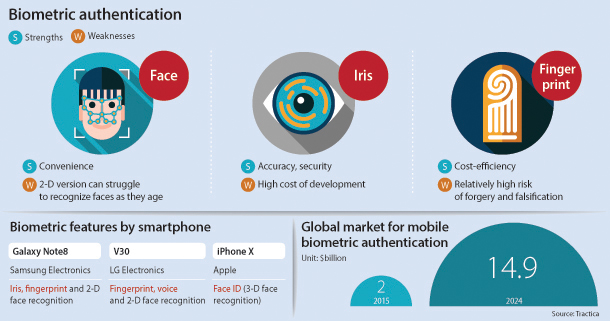 Exactly 10 years have passed since smartphones first became commonplace worldwide. With more players in the field and the competition fiercer than ever, leading manufacturers are recently turning to biometrics as their differentiating edge.

Over the last decade, design and hardware components including memory have rapidly matured, leaving less room for innovation and improvement today. Biometrics, on the other hand, is a relatively new function and a new realm for technological enhancements. This room for potential growth is what manufacturers are trying to fill with vast investments and research in the hope that it will give their products a cutting edge in the market.

Apple recently made a fierce move in this area as it unveiled a feature called Face ID on the new iPhone X - a model due to be released in November that celebrates the series’ 10th anniversary. The device uses a combination of infrared and visible light to scan a user’s face in 3-D, allowing it to recognize the user’s face regardless of lighting conditions and any accessories they are wearing, including contact lenses.

Biometrics based on facial recognition is not new, but has previously only been possible on a 2-D level. Apple seems confident in its new technology, even excluding its tried-and-true fingerprint authentication system, known as Touch ID, from the iPhone X.

Rival Samsung Electronics also stressed its biometric technology, iris recognition, as a core function of the Galaxy Note8 released last month. The feature was first introduced in its unsuccessful predecessor, the Galaxy Note7, which went up in flames shortly after its launch.

“Iris recognition is a technology that we prepared for four years,” said Koh Dong-jin, president of Samsung’s mobile communications business at the launch event of the Galaxy Note8 last month. “It wasn’t developed in awareness of other competitors.”

As smartphone manufacturers are increasingly trying to differentiate themselves based on these authentication systems, the question is which one is actually superior. Tech specialists say they each have strengths and weaknesses.

Iris recognition is deemed the best biometric technology in terms of accuracy and security. “The possibility of more than two people having the exact same iris is one in a billion. Forgery and falsification are practically impossible,” said CEO Han Sung-eun of Irisys - a local company that develops security devices and solutions based on iris recognition.

Voice recognition comes out on top in terms of convenience. Once a voice is registered, the device can be unlocked without the user needing to physically interact with it. The technology does have its limits: It recognizes only a limited pool of words and its weakness to surrounding sounds remain unsolved. Some question its security.

Face recognition is also convenient as it can work from a distance. However, there were concerns with the 2-D version that the authentication would not function smoothly in circumstances with different lighting, angles and any physical changes that come with age.

This is why Samsung Electronics advises users to use iris or fingerprint recognition instead of its 2-D facial authentication for stronger and more accurate security. Its payment application, Samsung Pay, for example, cannot be activated via facial recognition. From another perspective, the shortcomings of 2-D facial recognition are exactly why consumers highly anticipate Apple’s Face ID.

Of course, there are concerns. At the iPhone X launch event, Face ID only recognized Craig Federighi, Apple’s senior vice president of software engineering, on the third attempt. This happened not so long after Schiller had praised Face ID’s accuracy, leaving the impression that the technology still has a way to go.

Still, researchers and industry insiders say biometric authentication has growth potential that will be fueled by the development of ICT and on-going competition among IT giants to gain the lead in the smartphone market.