In Korea, smokestacks give way to clean rooms

In Korea, smokestacks give way to clean rooms 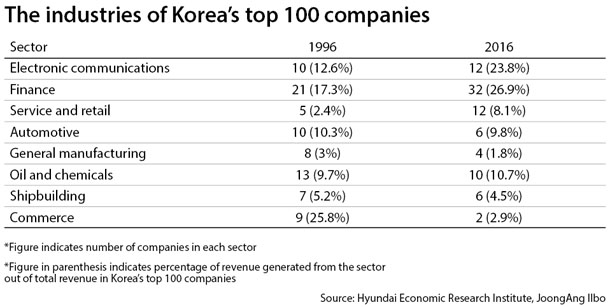 Korea’s ascent to Asia’s fourth-largest economy may have been built on heavy industries like petrochemicals and shipbuilding, but in the 21st century, information technology and services have emerged as vital sectors for the country.

A recent study conducted by the JoongAng Ilbo and Korea Economic Research Institute showed that the list of Korea’s top 100 companies has undergone a major shift in the past two decades, with tech giants supplanting many heavyweights in traditional manufacturing.

In 1996, there were 53 companies associated with so-called smokestack industries like shipbuilding, petrochemicals and automotive. These industries accounted for 40.8 percent of revenue generated by the country’s top 100 companies at the time, playing a vital role in the nation’s economy. The revenue of nine trading companies that exported “Made in Korea” products accounted for 25.8 percent.

But in the face of rapid industrial shifts entering the 21st century, these industries that laid the foundation of Korea’s economy quickly lost their status.

Samsung C&T, a construction affiliate of Samsung that reigned at the top of Korea Inc. in terms of revenue in 1996, fell to 15th in 2016. Daewoo, a trading company now under Posco Daewoo, was ranked third 20 years ago but has since dropped to 27th. Hyundai Corporation and LG International, also trading companies, ranked second and fifth in 1996, but both now fall outside the top 100.

The rankings show that Korea’s top companies are now mainly dedicated to information technology, finance and telecommunications. Two decades ago, just 10 tech companies were in the top 100. Now, there are 12, and their revenue accounts for 23.8 percent of the total, nearly double from 12.6 percent in 1996 on the back of strong performance from conglomerates like Samsung Electronics and LG Electronics.

Korea’s service and finance industries have showed solid growth as well. In 1996, a mere five companies in the top 100 were associated with retail and service. The figure has since doubled to 12.

In finance, the number of companies has gone from 21 to 32.

Meanwhile, the number of companies associated with smokestack industries has shrunk to 39, and the number of trading companies has declined, down to just two in the top 100, suggesting that Korea’s economy, once reliant on labor-intensive business, has now transformed to a more technology-driven economy.

“With the rising cost of labor and logistics, the growth of traditional manufacturing is slowing,” said Yoo Hwan-ik, head of the policy department at the Korea Economic Research Institute. “Instead, the tech industry is leading the country’s export business, and the service industry is backing up the domestic economy.”