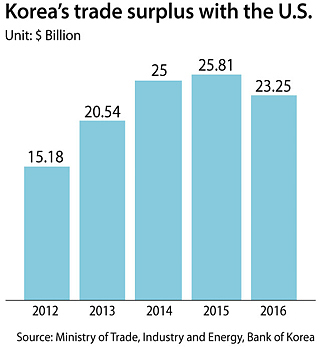 As Korea and the United States agreed to amend the bilateral trade agreement, concerns have arisen over the possible impact of the revised trade pact on Korean companies at a time when many have already been affected by Beijing’s economic retaliation over a U.S.-led antimissile system.

The joint announcement on Wednesday, Washington time, that the two agreed on the need to revise the Korea-U.S. FTA raised concerns among Korean officials and companies alike over how strongly the United States is going to push for changes in the five-year pact.

The amendment announcement was also a turnaround from Korea’s suggestion of a review of the economic effects on the two sides and causes of the U.S. deficit.

Korea’s proposal of a joint study in advance was seen as a sign of its opposition to the revision process. But things rapidly changed following news reports that President Donald Trump was actually only a step away from formally declaring the withdrawal from the Korus FTA, going as far as writing a letter backing out of the pact.

The report propelled Kim Hyun-chong, Korea’s trade minister, to propose the second special session of the joint committee with Robert Lighthizer, the U.S. Trade Representative, in Washington, where the two acknowledged a need to amend the pact.

“The two sides agreed on the need to revise the agreement to further strengthen the reciprocal benefits stemming from the Korus FTA,” said the top negotiator after the meeting.

Inside U.S. Trade, an online media outlet, reported that there were sentiments in Washington that Korea “underestimated how little Lighthizer cared” about the Korus pact and “how much Trump detested it,” citing unnamed sources. It was also reported that the U.S. trade delegation team brought “a list of 40-50 demands” to the first joint committee session.

Once the two sides launch a renegotiation process, Korean exports of automobiles and steel are likely to be high on the agenda as the two have often been blamed for the U.S. trade deficit with Korea. In accordance with agreements reached in the FTA, tariffs on imported U.S.-made vehicles as well as Korea’s exported vehicles in the United States were lifted in January last year. Hyundai Motor, Korea’s largest automaker, exported 335,762 cars to the United States last year, down by 8.8 percent from the previous year at 368,172.

Washington could demand restoring tariffs on Korean-made vehicles to reduce its deficit, which amounted to $23.25 billion last year, according to Korea’s ministry of trade, industry and energy.

The Korean automobile sector has been highlighted as one industry that benefited from the bilateral agreement due to tariff withdrawal. But once tariffs are back in place, it could deal a blow to Korean carmakers already squeezed by declining sales in China.

The United States is also expected to demand Korea lower the non-tariff barrier on U.S. vehicles with high CO2 emission levels, as it previously argued that Korea applies a too-high emission standard as a way of reinforcing regulations to the disadvantage of the United States.

Another sensitive area is agriculture. The United States is said to have demanded Korea widen its agricultural market for U.S. products while calling for the expansion of tariffs imposed on Korean products exported to the United States by five to 10 years.

With the implementation of the Korus FTA in March 2012, the government immediately lifted tariffs on 578 U.S. agricultural products while agreeing to lift tariffs on another 1,499 products over a period of two to 20 years. For 118 products, including U.S. beef, Seoul decided to lift tariffs over at least a 15-year-period. As it has only been five years since the FTA came into effect, an estimated 545 U.S. farm products still have tariffs imposed on them. The United States could demand cutting that number.

Should Seoul bow to U.S. pressure to remove tariffs on more agricultural products, it will face intense criticism from farmers.

Experts say Seoul should have taken a more active position in the face of U.S. demands to renegotiate, rather than initially treating it as a bluff.

It was not until after the Kim delegation learned that Trump was not bluffing on the FTA termination that Korea formally requested a second meeting in late September to prevent that from happening.

“The U.S. now knows that Korea is afraid of the Korus FTA termination,” Choi Won-mook, a law professor at Ewha Womans University, told the JoongAng Ilbo. “Knowing that, it will always wield the termination card as leverage in future negotiations when it feels cornered.”

Both Seoul and Washington need to hold public hearings and consultations with their respective legislatives before formally declaring the renegotiation, which could start by the year’s end at the earliest.