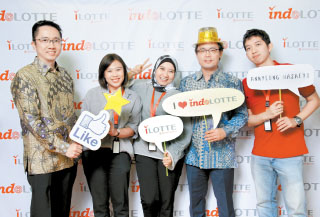 The marketing team for iLotte, an e-commerce platform launched by IndoLotte, a joint venture between Lotte Group and Indonesia’s Salim Group. [LOTTE GROUP]

After an unceremonious exit from the Chinese retail market following a year of struggles, Lotte Group is quickly pivoting to Southeast Asia for greener pastures.

The website, which launches today, has a rare mall-in-mall user interface with pages for Lotte Department Store, Lotte Mart and home shopping site Lejel all in one place. It will initially feature 1,000 brands, including major Korean cosmetic names like Sulwhasoo, Laneige, Etude House and Tony Moly.

Lotte Group said it is planning to partner with Indonesia’s largest fashion company, MAP, to make one of its brands, Sports Planet, available on iLotte. Books will also be added to the lineup in the future, the company said, in an attempt to make an online version of a mega shopping complex.

Lotte said it expects synergy with Salim Group’s diverse range of businesses, from convenience stores and food to logistics and telecommunications.

For online orders in Jakarta, Lotte plans to provide a bike delivery service that delivers products from Lotte Mart to people’s homes. The company said its test run of a three-hour delivery service in the Indonesian capital received positive reviews from local consumers.

Indonesia’s online shopping business was worth an estimated 4.2 trillion won ($3.7 billion) as of 2015, according to industry reports, accounting for 0.7 percent of the entire retail business there. Although small, its importance is rapidly growing with the rising penetration of mobile devices. Analysts expect Indonesia to become the third-biggest e-commerce market in Asia, after China and India.

“With the retail experience that Lotte has accumulated in Korea, we plan to take the lead in Indonesia’s e-commerce industry hand-in-hand with Salim Group, which has experience in local marketing,” Lee Jae-kwan, president of IndoLotte, the joint venture, said.

Indonesia is one of several Southeast Asian markets that Lotte has been eyeing since the company pulled its Lotte Mart business out of China. Korean retailers have been struggling in the Chinese market after consumers boycotted Korean products in response to Seoul’s decision to install a missile defense system that Beijing views as a security threat.

Lotte has been looking to Southeast Asia as an alternative. Last month, Lotte Card announced it would acquire the Vietnamese credit card company Techcom Finance, a subsidiary of Techcom Bank, one of the country’s top five banks, and offer credit card services and loans. It will be the first Korean credit card company to do business in Vietnam.

Emart, another major Korean retailer that pulled out of the Chinese market, is pursuing the Vietnamese market as well.

After opening its first location there in 2015 and raising solid profit, Emart said last year it would invest $200 million through 2020.