Brooks Raley pitches during the second playoff game against the NC Dinos at Sajik Baseball Stadium on Monday. [YONHAP]

The Lotte Giants didn’t disappoint their fans twice, defeating the NC Dinos 1-0 in the second game of the first series of the postseason at Sajik Baseball Stadium on Monday. A 9-2 loss on Sunday caused a number of fans to cancel their tickets for the second game, but a victory against their regional rival on the second day has taken the two teams back to square one with all to play for as the series continues today.

During the first game on Sunday, the Dinos scored seven runs in the 11th inning, giving them a one-game lead in the best-of-five series. As a result of that initial loss, the Giants failed to pack Sajik on Monday, with just 25,169 fans visiting the 28,000 seat stadium. 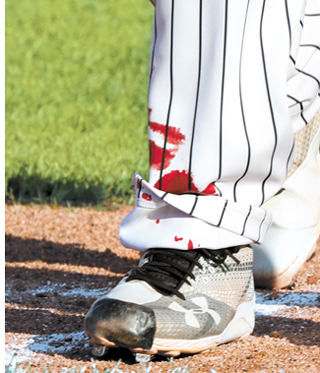 Brooks Raley’s left leg after getting hit by a broken bat while pitching against Na Sung-bum on Monday. [NEWS1]

Monday’s game started off well for the Giants, with starting pitcher Brooks Raley only giving up four hits and no runs in the first five innings. At the top of the sixth things took a worrying turn, however, after Raley was struck in the leg by a broken bat and had to be taken out.

“Our starting pitcher Raley pitched well,” said Cho Won-woo, the Giants’ manager. “He had to leave due to an unexpected injury, but just like the regular season, we were able to win with our bullpen doing their jobs.”

After Raley’s injury, Park Jin-hyung was unexpectedly given a chance to get on the mound to complete the sixth and allowed a two-base hit to Xavier Scruggs, the Dinos’ fourth batter.

Following Park Jin-hyung, Cho Jung-hoon and Son Seung-lak successfully maintained the Giants’ one run lead. As a result, Raley picked up his postseason win and was selected as MVP for the game.

Raley, who joined the Giants in 2015, had struggled the most this season, picking up six wins and seven losses with a 4.67 ERA. There had been rumors that the Giants would release him. Rather than releasing him, Cho demoted him to the futures league at the beginning of June.

During Raley’s time in the futures’ league he worked on improving his change-ups. Unlike other pitchers, Raley lowered the speed in his change-up and once he returned to the Giants, from June 24 to Sept. 23, he helped the team to go on a 10-game winning streak. Though he struggled a lot at the beginning of the season, in the second half he picked up seven wins to record 13 wins for the season.

“Since ace pitchers play in big games, it’s hard to score runs,” Cho said. “As a manager, I need to trust my players and go with it. Once the batters start to find confidence, I’m expecting them to score more runs starting from the third game.”

A victory has now put the two teams back to square one, but the Giants’ batters still remained silent. Throughout the game, the Giants managed to get nine batters on base, but were only able to score one run.

“I didn’t expect the scores to be this low,” said Kim Kyung-moon, manager of the Dinos. “This is why baseball is difficult. Though we lost [the second game], we earned a great pitcher like Jang Hyun-sik. Jang Hyun-sik had great pitching on the mound today. If he had less pitches, having a total of 110 pitches, he would’ve stayed on the mound until the eighth.”

A loss is never a good thing, especially in the postseason, but the Dinos may have found their pitcher for the upcoming games, as Jang only gave up one run in seven innings. Though he showed unstable control throughout the innings, giving up five walks, he managed to not allow any additional runs.

“We need an ace pitcher and once Jang Hyun-sik gains experience, he will be able to play the role,” Kim said. “We’ll prepare well and have another great game in the third postseason match.”

Starting today, the third and fourth game of the series will be played at Masan Baseball Stadium in Changwon at 6:30 p.m.

The winner of the series will go on to play the Doosan Bears next week in the final postseason match up before the Korean Series.