A feint to the East

A feint to the East 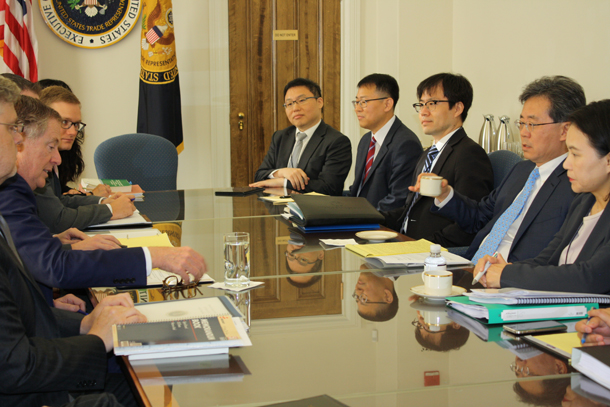 As Trade Minister Kim Hyun-chong was preparing to meet with U.S. Trade Representative Robert Lighthizer to renegotiate the Korea-U.S. free trade agreement in Washington, D.C. last week, he had an unofficial agenda item: securing basketballs signed by Patrick Ewing, the NBA legend and current head coach of the Georgetown Hoyas.

Lighthizer graduated from Georgetown University, in both the undergraduate and law programs, and is known to be a basketball fan. He never fails to get season tickets to his alma mater’s games. Kim wanted to get two autographed basketballs from Ewing, one for Lighthizer and one for himself. It did not go as planned due to a scheduling conflict, but it was a part of his strategy to lower Lighthizer’s guard.

To members of his negotiation team, Kim gave very strict instructions, ordering them not to bow or lower their heads when shaking hands with their American counterparts. He learned from experience that even a slight gesture could affect their equal relationship, and once the balance is broken, it could influence the negotiation process.

Korea’s first free trade partner was supposed to be Japan, but in 2007, Kim, then a free trade negotiator, unexpectedly chose the United States instead. His strategy was “allying distant states while attacking nearby states,” a piece of foreign policy advice that Fan Ju, an adviser during China’s Warring States period, gave to King Zhao of Qin.

However, Kim approached Mexico and Canada first. It was a strategy to contact rivals to move the country of interest, as their export items overlapped with those of the United States. Then, the United States would no longer be reluctant and propose a preliminary negotiation first. The outcome was favorable to Korea.

But things have completely changed in 2017. The United States is escalating the North Korean nuclear crisis and seeking to take economic advantage. The strategy is using security issues for economic gain. Here, Peter Navarro, a trade protectionist and director of the White House National Trade Council, is leading efforts to scrap the free trade agreement. Those who supported Steve Bannon, the former White House chief strategist, are also helping, and President Donald Trump will do anything associated with “America First.”

The game has only just begun. In his first speech as trade minister, Kim mentioned “making a feint to the East and attacking in the West.” It is a tactic of confusing the enemy and making unexpected moves.

Next month, a Korean delegation is visiting Russia, the first step in signing a free trade agreement with the Eurasian Economic Union that includes Russia, Kazakhstan, Belarus, Kyrgyzstan and Armenia. The strategy is aimed at the United States, which considers Russia a virtual enemy.

But there’s more to Kim’s “feint to the East and attack in the West” strategy. Fundamentally, he is fighting to win, not draw. His mind is already on the reverse strategy of seeking security gains through the free trade deal, just as the United States is pursuing economic gains from security concerns. Of course, this will include the currency swap between the United States and Korea. When former U.S. Secretary of State Henry Kissinger met Kim, he asked how a strong ally differed from a common one, and Kim has been laying the question to heart.

Ten years ago, Kim sat up straight and prayed each night to find strength in himself and bring the nation luck. Nowadays, he is said to be praying with his head down. In a decade, the variables and situational limits have changed, and he feels more agonized. Some criticize him for renegotiating after he said he would not.

But Kim’s negotiation skills are fluid. He negotiates to win, and we hope for the same miracle that he accomplished in 2007.