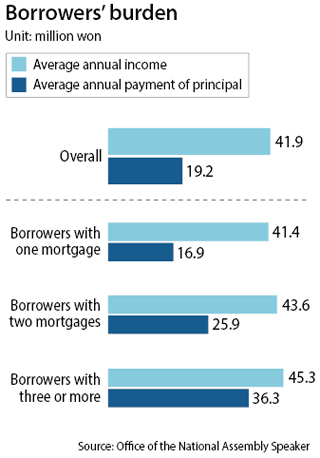 If these individuals start paying off their loans with principal, they would have to put in 150 million won annually. Even with unreported income from, say, leasing out apartments, it is questionable whether they can bear the burden of their loans.

The worrisome findings come from the office of the National Assembly speaker, Chung Se-kyun, ahead of an annual legislative audit. According to the study released Monday and based on information provided by the Korean credit agency NICE Holdings, there are 1.3 million people with at least two homes purchased with two or more mortgages as of June this year.

Even more concerning: among them, 310,000 have more than three mortgages.

“Among those with more than two homes, there could be people who actually live in both of them because they could happen to be weekend couples [living separately because of the location of their jobs],” said Lee Jun-hyup, the policy secretary in the National Assembly speaker’s office. “But when you own more than three homes, the possibility of those purchases being for investment is high.”

Lee said the investments could be speculating on apartment prices or seeking income from rent.

The average borrower with more than three homes had 292 million won in loans, twice the average of people with a single mortgage at 131.8 million won.

What’s troubling, though, is that the annual income of those with a single mortgage and those with three or more were almost the same.

While a majority of the borrowers (73 percent) had high credit scores and were in the middle-income bracket of 30 to 60 million won (59 percent), those in lower-income households with less than 30 million won took up a sizeable portion as well, at 22 percent.

The National Assembly speaker’s report showed that nearly half of borrowers with multiple mortgages (about 140,000) also had unsecured loans. Those who borrowed from nonbanking financial institutions with high interest rates amounted to 58,707. These individuals sought loans from private lenders because they had reached their limit on loans from banks.

“It is appropriate to set the direction of policies in managing the debt of those with multiple loans,” the National Assembly speaker said in a statement. “There’s a need to pursue a policy that will help these people with multiple loans from failing to pay their debts.”

The government is currently working on household debt policies that will focus on managing the debt of individuals with multiple loans.