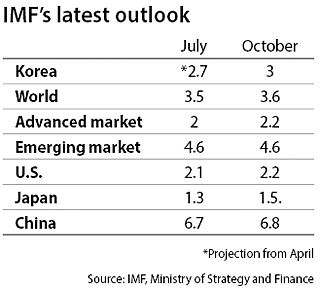 The International Monetary Fund (IMF) has raised Korea’s outlook to 3 percent, 0.3 percentage points higher than the last forecast in April.

The IMF World Economic Outlook, released on Tuesday, also raised next year’s growth to 3 percent, the same as this year’s, higher than the 2.8 percent projected in April.

According to the Ministry of Strategy and Finance, the IMF’s positive outlook is based on expectations of improvement in global trade and larger import demand in China.

Even the outlook for advanced economies has been raised 0.2 percentage points higher than an earlier projection in July, to 2.2 percent, moving up the world’s outlook from 3.5 percent to 3.6 percent.

The IMF said it expects a strong recovery that is faster than earlier expectations, particularly in advanced economies, including the Eurozone, Japan and Canada.

Even the outlook for the United States has been raised due to favorable financial conditions and positive market sentiment.

The improved outlook on Korea’s economy came after IMF chief Christian Lagarde, during a recent visit to Seoul, said she expects Korea’s growth for this year to hit 3 percent.

“IMF is upbeat about Asia,” Lagarde said, adding it was the “fastest growing region.” She commended government policy as well as monetary policy and structural reforms.

“As I said, the takeaway from my visit is the strong impression of the Korean economy,” Lagarde said, stressing that the number shows the performance despite the adverse circumstances it faces, such as geopolitical tensions, 1.9 percent inflation, fiscal surplus and a current account “a bit on the high side.”

She highlighted the Moon administration’s pursuit of fair competition in the business environment and its goal of creating a growth model based on innovation.

If Korea does reach an economic growth of 3 percent, it would be the first time since 2014. In the last two years, under the Park Geun-hye administration, the nation’s growth has been below 3 percent.

The IMF projection is more optimistic than Korea’s own. In fact, the Bank of Korea forecasts an expansion of 2.8 percent this year and 2.9 percent next year.

There have been growing concerns over whether the economy could even reach that level of growth considering the adversities it is facing, including continuing tension with China over the deployment of a U.S.-led antimissile system that has hurt Korean businesses, particularly in retail, tourism and the automotive industry.