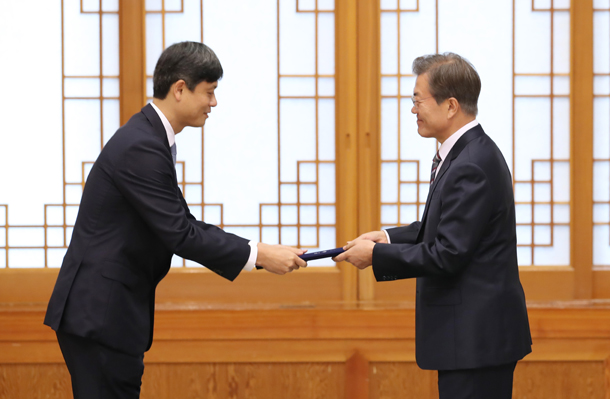 President Moon Jae-in, right, inducts Chang Byung-kyu as head of a special committee on the fourth industrial revolution on Tuesday at the Blue House. [YONHAP]

On the same day, the newly-formed Ministry of SMEs and Startups selected 48 venture capital firms to build and manage a 1.4 trillion won ($1.2 billion) fund that will finance start-ups specializing in so-called fourth industrial revolution technologies like robotics, big data, artificial intelligence and the Internet of Things.

The presidential committee, which consists of 20 members from the private sector as well as academics and government officials, will hold its first meeting today and propose a blueprint for the administration’s fourth industrial revolution policies.

The Moon administration has been emphasizing the significance of the development of such high-tech areas as one of its key pillars of achieving innovative growth.

“I hope [Chang] will jointly [with the government] lead plans on innovative growth, which is one of our government’s core growth plans,” President Moon said during the induction ceremony at the Blue House in central Seoul. “[We] hope that [the committee] will take up the role of building the foundation and providing the policy projects necessary for the fourth industrial revolution that will not only prevent us from falling behind but also further raise the country’s competitiveness.”

Chang is expected to play a significant role in tech policy, especially since the start-up minister position remains vacant. Moon’s nominee for the post, Park Seong-jin, a professor at the Pohang University of Science and Technology, resigned from consideration last month after controversy over his religion and views on history.

Chang, the founder and chief strategic officer of game developer Bluehole, was initially approached by the Blue House to lead the Ministry of SMEs and Startups, which was upgraded from the Small and Medium Business Administration. However, he declined the offer.

During a meeting with representatives of the nation’s small and medium-sized businesses on Tuesday, Finance Minister Kim Dong-yeon stressed the government’s will to support innovation and growth in Korea.

“We will pursue detailed policies that will raise productivity and efficiency throughout all industries with velocity so that companies can actually feel changes,” the minister said.

Meanwhile, venture capital firms selected by the Ministry of SMEs and Startups will receive 860 billion won from the government to create a fund. The goal is to attract 585 billion won in investment from the private sector by the end of the year to build a 1.4 trillion won fund for new technologies and start-ups.