Showing the ups and downs of having a pet

Showing the ups and downs of having a pet 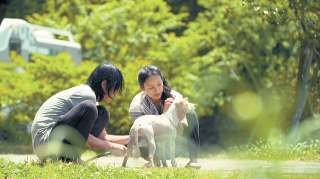 Featuring cute pets has long been a surefire way to boost a television show’s ratings. The roles of Sang-geun from KBS2’s “2 Days & 1 Night,” San-che and Ming-ki from tvN’s “Three Meals a Day” and Mocha from “Hyori’s Homestay” on JTBC, cannot be ignored when it comes to reasons why those programs have been so popular.

Playing off what audiences love, producers have begun to feature pets not just as mere sidekicks that hang around celebrities, but as main protagonists at the center of the shows.

Calling itself a “show that encourages viewers to raise pets,” Channel A’s “A Man Who Feeds the Dog,” which kicked off its second season in April, observes the routines and interactions of dogs and their celebrity owners.

Showing animals on TV has played a major role in increasing interest in people raising animals of their own, which some say has contributed to the pet industry’s growth. But some animal activists complain that the programs only reveal the fun parts of having a pet without showing the difficulties that come along.

“I’m not supportive of animal-based entertainment programs because they mostly focus on using the animals to entertain,” said Jeong Ho-won, director at Korea Companion Animal Management Association. “Though the shows may encourage more people to get a pet, it could also result in an increased number of abandoned pets and abused animals, which may result in a greater burden for society.”

Culture critic Hwang Jin-mi explained that it is crucial for animal-focused television programs to show what it is like to raise a pet starting from the process of how they get adopted to what kind of care they need at different stages of life.

In response to such criticism, there has been an effort to create more entertainment programs that give viewers a look at the world from their pet’s perspective. TV Chosun recently began airing an animal-focused entertainment show named “Patrasche.” Narrated from the dogs’ perspective, the show revolves around the premise that the dogs featured are the ones that picked their owners to help them live their lives instead of the other way around.

Cable channel tvN’s latest program “Dear My Human” shows the interactions between celebrities, including actress Lee Soo-kyung and rapper Dok2, and their pets. Observing the pets’ behaviors, experts help the stars train the pets and offer insight into how they can better understand their pets’ way of thinking.

But these kinds of programs could be more dangerous, according to Jeong.

“Every pet has a different personality and a different way of expressing themselves. So it would be very dangerous if people generalize their pets’ behaviors based on what an animal psychologist from a television show says,” Jeong said, while also noting the danger of narrating pets’ voices based on assumptions.

Adding warnings to the shows could be a way to let viewers know that what they are watching is meant to be entertainment and not always grounded in fact, according to Hwang.

“Instead of merely visualizing the cuteness of the animals or stressing how helpful they could be to lonely people, animal-centered programs should at least include subtitles that warn viewers of the challenges and responsibilities that having a pet entail,” said Hwang.