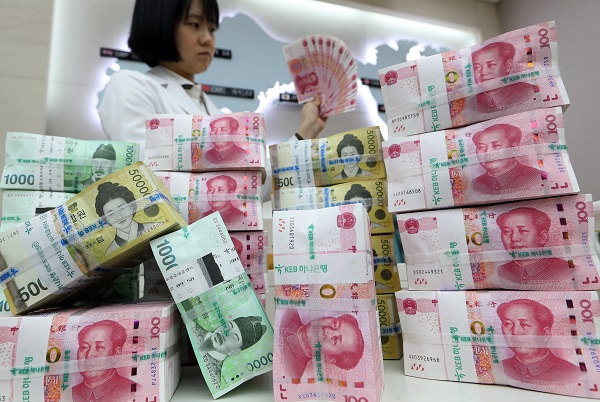 An employee at KEB Hana Bank looks at Korean won and Chinese yuan at the bank’s main branch in central Seoul as a currency swap deal between the two countries is due to expire today. [YONHAP]

The central banks of Korea and China are yet to announce a decision on the renewal of a bilateral currency swap arrangement, raising questions over the future of the deal that technically expires today.

The Bank of Korea and the Finance Ministry said that the discussion is still underway.
“Nothing has been decided so far and a meeting [with the People’s Bank of China] is scheduled today,” said Bank of Korea Governor Lee Ju-yeol.

The Bank of Korea refuted the claims, saying that the bank “is unable to confirm the reports since the two parties are in talks.”
Finance Minister Kim Dong-yeon struck an optimistic tone when he met reporters on Tuesday after a visit to the Korea Federation of SMEs in Yeouido, western Seoul.

The fact that the parties failed to strike a deal by the maturity date doesn’t necessarily mean that renewal is unlikely, as negotiations can continue even after the expiration date.

The two countries began the exchange worth $26 billion back in 2009 to avoid a liquidity crisis and facilitate bilateral trading. Both parties agreed to double the size in 2011 and went on to renew the swap deal in 2014 during former President Park Geun-hye’s state visit to China.