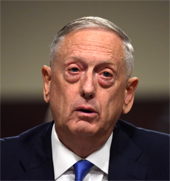 “It is right now a diplomatically led, economic sanctions-buttressed effort to try to turn North Korea off of this path,” Mattis said in his keynote address to the Association of the United States Army annual meeting in Washington Monday.

“What does the future hold?” he asked. “Neither you nor I can say, so there’s one thing the U.S. Army can do, and that is you’ve got to be ready to ensure that we have military options that our president can employ, if needed.”

Trump has continued to tout a military option, especially following North Korea’s intercontinental ballistic missile (ICBM) launches and sixth nuclear test last month. He tweeted Saturday that after 25 years of failed attempts at negotiating with Pyongyang, “only one thing will work.”

U.S. Army Chief of Staff Gen. Mark Milley said, regarding North Korea’s nuclear and missile programs, there are “no good, easy .?.?. risk-free options” and that no one should “underestimate” the situation.

“A full-blown war on the Korean Peninsula will be horrific by any stretch of the imagination,” Milley said to reporters on the sidelines of the same meeting, but added that a missile striking Los Angeles or New York would be “equally horrible.”

He added that there is not an “indefinite amount of time” to solve the crisis, and that “there will be decisions made, there’s no question about it.”

“There are no good, easy, you know, risk-free options here. This is extraordinarily difficult, extraordinarily dangerous. No one should underestimate it,” he said, adding, “that decision will be made by the duly elected representatives of the United States of America,” not the military.

Russian Foreign Minister Sergei Lavrov told U.S. Secretary of State Rex Tillerson in a phone call on Monday that “any escalation of tension on the Korean Peninsula, to which the [United States’] military preparations lead, is “inadmissible.” This ministry said in a statement that Lavrov called for the issue to be resolved “exclusively by diplomatic means.”

“The Korean government holds the consistent position that a war should never break out again on the Korean Peninsula,” Noh Kyu-duk, spokesman of the South Korean Ministry of Foreign Affairs, told reporters in Seoul on Tuesday on the possibility of military action by Washington.

“We are aware the U.S. government will fundamentally use political, diplomatic and economic methods to achieve North Korean denuclearization, and in order make this more effective, it holds the position that it will leave all options open.”

He continued that the South Korean and U.S. governments have agreed to closely cooperate and make decisions together as an alliance on matters involving North Korea.