Sun Dong-yol, manager of the Korean national baseball team, announced a 25-man roster for the Asia Professional Baseball Championship (APBC) 2017 at the KBO headquarters on Tuesday. 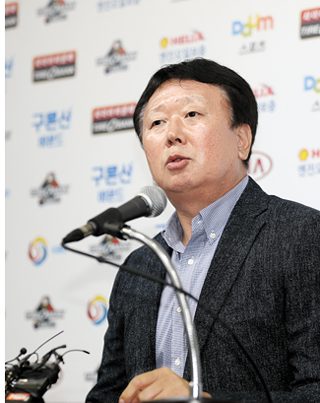 Sun Dong-yol, manager of the Korean national baseball team, speaks at a press conference at the Korea Baseball Organization headquarters on Wednesday after announcing his 25-man roster for the APBC Championship. [YONHAP]

Rather than the three wildcard selections, Sun completed his first national team roster with rookie players, which include Lee Jung-hoo of the Nexen Heroes and Park Se-woong of the Lotte Giants.

“Considering the future, it is better to give more chances to younger players,” Sun said.

The APBC 2017, a friendly tournament amongst Korea, Japan and Chinese Taipei starting on Nov. 16, has an age limit, with only players under 24 years old or with less than three years of professional experience allowed to participate. Each team is also given three wildcards - three players that do not fulfill these requirements.

“When I heard that Japan wasn’t going to make wildcard selections, I thought there was no need for us to use our wildcards,” Sun said.

The wildcard concession was originally added to help Chinese Taipei. The tournament was first played with only players under 23 years old, but the rules were changed to under 24-year-olds with the wildcards as Chinese Taipei struggled to field a team.

The Korean national baseball team’s goal isn’t just to win the APBC 2017 in November. Sun considers the tournament as part of the squads preparation for the 2019 Premier 12 and the 2020 Tokyo Olympics.

“Among the players I’ve selected, there is no single player that has experienced the Tokyo Dome,” Sun said.

That said, of the 25 players, Kim Ha-seong of the Heroes is the only player with national team experience. Including Park of the Giants, Jang Hyun-sik of the NC Dinos and Ham Deok-ju of the Doosan Bears, 12 pitchers were included in the roster. Aside from the pitchers, Sun added two catchers, six infielders and five outfielders to complete his first national team roster.

Lee, the super rookie in the KBO this season, is half of the second-ever father-son duo due to be on the national team, as Lee’s father Lee Jong-beom will be the base-running coach.

“It feels great but at the same time, it gets me a little worried,” said Lee Jong-beom, a former KBO MVP. “I hope this becomes a good motivator in helping him prepare for the upcoming season.”

This is the first time in 30 years, since Kim Jin-young and Kim Kyung-gi, that a father and son have both been part of the national team in a tournament.

“Since I was little, I dreamed of being on the national team with my father,” Lee Jung-hoo said.

Throughout the 2017 season, Lee has played well above expectations. Starting from the exhibition games, Lee successfully added his name to the Heroes’ starting lineup, playing as an outfielder.

During the roster announcement, Sun mentioned that injury was another big factor in player selections, as some of the KBO’s young stars, like Choi Won-tae of the Heroes, Kim Jae-yoon and Um Sang-back of the KT Wiz and Kim Dong-yub of the SK Wyverns, weren’t included in the roster.

The Korean national baseball team will start training in Korea from Nov. 5 to 13. They will leave for Tokyo on Nov. 14 and play against Japan on Nov. 16.