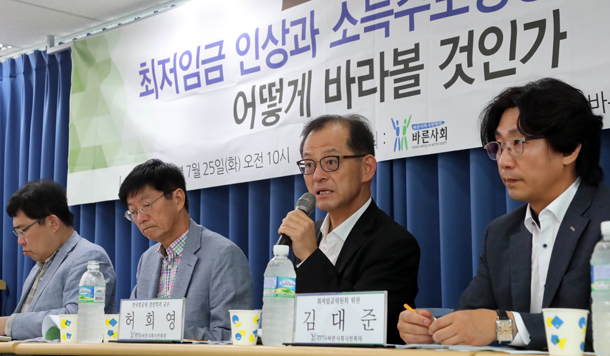 President Moon Jae-in’s idea of “income-led growth” was criticized for having no basis in economic theory. But does it really? I decided to look through my bookshelf for answers and found “Economics” by Paul Samuelson.

Because Samuelson evaluated the pros and cons of major scholars, from Adam Smith, who valued the power of the market, to John Maynard Keynes, who stressed the role of government, he has been praised as the “economist of economists.”

Chapter 4, which discusses market efficiency, equality and income distribution, caught my attention, but I could not find any argument that income, without improving productivity, would lead to growth. Due to market inefficiencies, the book argued, it is difficult to conclude that income is distributed fairly, and that is why governments put effort into easing poverty.

Perhaps that was the closest idea to income-led growth. While Smithians and Keynesians have long engaged in discussions to find a resolution, Samuelson could not jump to a conclusion on who was right and who was wrong.

The debate surrounding the Moon administration’s economic policies, dubbed “J-nomics,” is no different. The liberals and conservatives are fiercely debating whether the country should adopt an income-led policy or innovation-led policy. The only clear thing is that dogmatism is dangerous. Just like two wings of a bird, harmony between growth and distribution is needed in the economy.

But the drivers of J-nomics are operating the Korean economy without pushing for innovative growth. They have issued pro-labor, anti-corporate measures one after another, pressuring companies by raising the minimum wage, upgrading contract workers, raising corporate taxes, increasing salaries and abolishing a system that allowed employers to lay off underperforming workers.

Five months have passed since Moon took office, and his economic policies are showing poor performance. The youth unemployment rate in August was the highest in 18 years, while the indexes for manufacturing operations, consumption, investment and construction plummeted. On the first day of the Chuseok holiday, good news came that September exports were the highest ever, but everyone knows it was solely because of semiconductors.

Now is the time for proponents of J-nomics to refurbish the policy with bold approaches. Their key belief is that neoliberalism, with its basis in Smithian ideas, cannot resolve the income gap and low growth. They believe that deregulation and tax cuts will only make conglomerates richer, while the people’s income and lives will see no improvement.

Their diagnosis is reasonable, but efforts are still needed to resolve these problems. The world’s most renowned economists, including Joseph Stiglitz, Paul Krugman and Lawrence Summers, have all argued that appropriate government intervention is necessary because of inequality stemming from failed distribution.

But the intervention cannot be radical or one-sided. In order to respond to structural problems caused by the advancement of technology and trade protectionism, maintaining innovation is necessary. The entire world is responding to the fourth industrial revolution, but Korea is still falling behind — even to China in some areas — because innovations at companies are blocked by obsolete regulations from 30 years ago.

It is belated but fortunate that Moon recently ordered a strategy for innovative growth. The issue is how wide the operators of J-nomics will open the path for companies imprisoned by regulations. No matter how “warm” Moon’s economic policy is, it will be meaningless if growth engines are shut down. That is probably why economic gurus since Alfred Marshall have urged to tackling issues with a warm heart but cool head. This is the lesson that operators of J-nomics in the Blue House must remember.