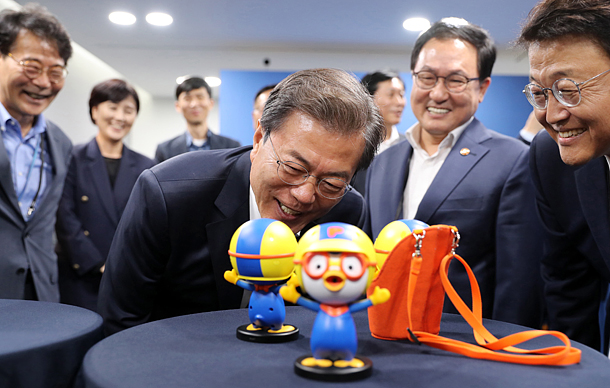 President Moon Jae-in strikes up a conversation with a “smart toy” run on artificial intelligence at S-Plex in Sangam-dong, western Seoul, on Wednesday. [YONHAP]

President Moon Jae-in vowed during the first meeting of his committee on the fourth industrial revolution Wednesday to encourage the creation of innovative start-ups and industries to revitalize the Korean economy.

The president expressed hope in a speech at S-Plex in Sangam-dong, western Seoul, that the committee would create a blueprint for innovative growth and aid the search for future profit drivers.

“Korea was once a land of opportunity as we used the wave of 21st-century information technology as the springboard for our economy,” Moon said. “The challenges that young people took on turned our hopes into reality, and our IT industry’s competitiveness became one of the top in the world.

“However,” he warned, “we have lost that vitality. We should once again take this intelligent information wave as our opportunity.”

Anthony Paek, founder and CEO of medical imaging start-up Lunit, began the meeting with a presentation on the meaning and global status of the fourth industrial revolution. He conveyed proposals from the private sector on the role of the Korean government, including promoting and fostering the development of new technologies through rational and practical regulations as well as support in public data collection.

From the government, Yoo Young-min, the minister of science and ICT, presented on the impact of advanced technologies, including their effect on not just industry but also jobs and standard of living. He highlighted the positive and negative impacts, such as widening wealth gaps and information leaks.

In particular, Minister Yoo stressed the need for a national approach toward science, technology and the economy to counter changes wrought by the fourth industrial revolution.

The president echoed that sentiment.

“While the intelligent information society will change our lives conveniently and efficiently, on the other hand there are also concerns of economic inequality including destruction of jobs and widening digitalization,” Moon said. “I hope [the commission] will seek policies that will create good quality jobs in new companies and new industries.”