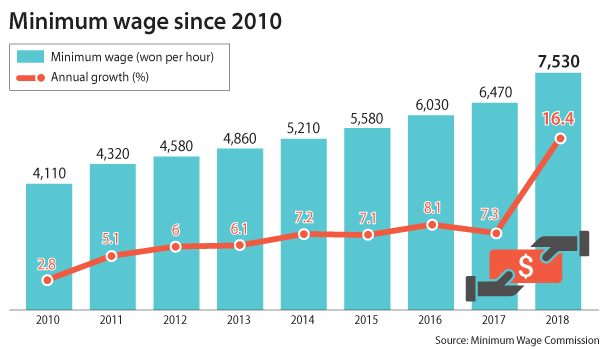 The government has begun efforts to overhaul the country’s minimum wage system, attempting a reform that has already failed twice in the past due to disagreement between business and labor.

On Tuesday, the Minimum Wage Commission started reviewing six changes proposed by representatives from trade groups and labor unions that could impact how the minimum wage is calculated and how it is applied in different regions and industries.

Previously, the government tried to reform the system in 2004 and 2015, but both attempts ended in failure because business groups and labor unions could not find common ground.

Compared to previous administrations, though, the current one under President Moon Jae-in has been expressed stronger determination to address the issue, especially since its minimum wage hike, set to go into effect next year, is the biggest ever and could impact hiring at small businesses.

Businesses, especially small and medium-sized ones, have expressed concern that they will be burdened by the higher labor costs, and the government has promised to help by chipping in cash.

Among the six reforms under review by the commission, three were proposed by labor unions and three by trade groups.

One of the proposals from labor is using the average living expenses of households, rather than individuals, to calculate the minimum wage.

Currently, the wage is set based on the expenses of a worker living alone.

On the other side, trade groups have requested including bonuses in the minimum wage.

The commission has assigned three scholars to research each item, a solution that the Moon administration has come up with as an alternative to direct negotiations between management and labor that have failed in the past.

“We expect to reach an agreement because unlike when management and labor were negotiating, experts will be reviewing them,” Uh Soo-bong, the commissioner, said.

Still, some are worried that because the scholars studying the issue are experts in labor law, they will not give sufficient attention to economic impact.

The commission, separate from the expert review, is also scheduling public hearings to collect different opinions on the matter. It will then submit a list of proposals to the labor minister, who will make final decisions.

If the plan goes accordingly, reforms could be finalized by early next year and implemented the following year.

Among the six items, the most controversial may be the one proposed by business, which has demanded different minimum wages apply to different industries and regions.

It has also proposed including more payments, such as bonuses and welfare expenses, as part of the minimum wage.

Currently, the minimum wage only reflects employees’ base salary.

Labor Minister Kim Young-joo during her nomination hearing raised the need to reform the minimum wage regiment, especially since some workers in the government and military technically make below minimum wage based on their monthly salary and the actual amount of hours worked.

Small businesses and the self-employed have particularly high hopes for a minimum wage that differentiates by industry and region.

Under such a system, those who work in less demanding jobs like convenience stores clerk or computer cafe staff will get relatively lower minimum wages compared to jobs that requires more labor like in manufacturing. This could mean fewer labor costs for small businesses, especially in the service sector.

In terms of region, reform could mean minimum wage will reflect different regions’ cost of living and rent. However, the plan is expected to face opposition from labor unions representing workers in factories outside Seoul, where living expenses and inflation tend to be lower than in the capital. This could stall the plan’s passage in the National Assembly.

As a result, minimum wages based on industry are likely to be implemented first since related regulations already exist and the government merely needs to adjust some clauses.

In a meeting with small and medium-sized business leaders on Tuesday, Finance Minister Kim Dong-yeon said the government would unveil details of measures to support businesses before the higher minimum wage goes into effect next year.

“By early November, we will be announcing the detailed measures including how the support will be delivered to small and medium-sized businesses and the self-employed,” Kim said.

The minister added that the government would continue to revise the measures as needed.