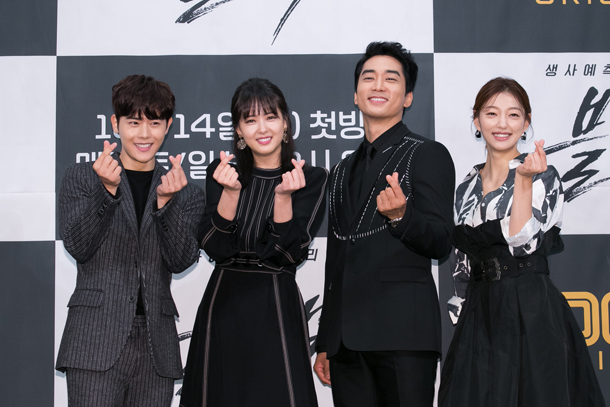 The hit tvN series “Guardian: The Lonely and Great God,” also known as “Goblin,” captured audience’s hearts earlier this year with a story involving death messengers. The upcoming OCN drama “Black” expects to achieve a similar achievement with a story including similar characters.

“Black,” directed by Kim Hong-seon and starring Go Ara and Song Seung-heon, will deliver a tense and mysterious story about a woman (Go) who predicts death, and a death messenger (Song) who prevents death.

“‘Black’ is a mystery drama with some fantasy elements,” the director said Wednesday at press conference held in southern Seoul. Though the series features death messengers just like “Goblin,” Kim stressed that “Black” will be very different from the tvN series.

“‘Goblin’ was a drama that focused on romance, but ‘Black’ will be based on fantasy and mystery,” Kim said. “Together with the scriptwriter Choi Ran, we aim to demonstrate problems caused by greedy and ambitious human beings, and to save those on the verge of death.”

Song, whose character takes on different forms - his coldhearted guide to the afterlife enters the body of a caring newbie detective - said that though the script was refreshing, it was initially not easy for him to fully understand.

“The first thought that crossed my mind after reading the script was, ‘What is this?’ Its genre was a mystery but it also had elements of romance as well as very complex relationships,” the actor said during the press event.

The drama also co-stars Kim Dong-jun and Lee El. The first of its 16 episodes will premiere on Saturday.