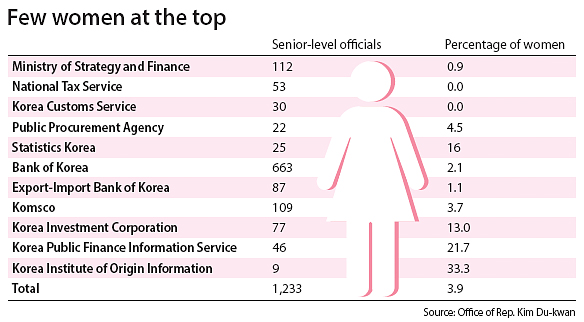 Women account for just 4 percent of senior-level officials in public financial institutions, a lawmaker from the ruling party revealed Wednesday.

In the Ministry of Strategy and Finance, Bank of Korea and nine other government agencies, there are only 48 women with a bureaucratic grade level of 3 or above, representing 3.9 percent of 1,233 high-ranking officials in the agencies, according to data released by Democratic Rep. Kim Du-kwan, who serves on the finance committee of the National Assembly.

There are nine tiers in Korea’s bureaucracy, with entry-level civil servants at level 9 and deputy ministers belonging to level 1.

In the Finance Ministry, only one woman holds a senior position out of the 112 people in that level. Across the ministry, women comprise about 29 percent of the workforce.

The dismal number of women in high-level positions is seen across the central government as well. Last year, female bureaucrats of level 4 or above accounted for 13.5 percent of all senior officials, a jump from about 9 percent in 2012. The government aims to raise the percentage to 15 by the end of the year.

During his campaign, President Moon Jae-in promised to fill at least 30 percent of minister positions with women. Currently, there are five female ministers out of 17 positions filled, representing about 29 percent.