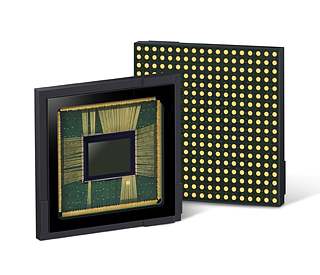 Samsung Electronics on Wednesday unveiled two new image sensors that have a higher resolution in a more compact unit than existing imaging technology.

Image sensors, often described as digital eyes, are chips that convert light particles into digital photos and videos, and are indispensable components in smartphone cameras. Both of the new sensors from Samsung are high-resolution image sensors in small chip packages, delivering detailed pictures in low-light environments without a camera bump, the company said in a release. Samsung’s Isocell-branded sensors have been used in the Galaxy smartphone series since 2014.

The new image sensors “fully utilize Samsung’s advanced pixel technology, and are highly versatile as they can be placed in both front and rear of a smartphone,” said Ben Hur, vice president of System LSI marketing at Samsung Electronics. “Samsung plans to further develop the Dual Pixel and 0.9 micrometers-pixel product categories, and expand applicable devices for Isocell image sensors that can enhance photographing experiences for consumers.”

The Isocell Fast 2L9 image sensor is powered by Dual Pixel technology, which makes ultra-fast auto-focus possible at a reduced pixel size. The technology employs two photodiodes in each and every pixel of the sensor instead of only one. With 12 million focus detecting pixels, the sensor is able to quickly focus on small still objects as well as lock on and track moving objects without losing focus, even in low-light environments. That gives the option of narrowing the depth of field to create bokeh, or aesthetically blurred photographs, through a traditional single lens camera, Samsung explained.

Thanks to the compact size, the sensor can easily fit into slimmer modules, allowing smartphones to be designed without a bump to accommodate the camera.

The Isocell Slim 2X7 uses a different technology called Tetracell. It lets the sensor take brighter photographs in the dark and more detailed ones in well-lit environments by merging four adjacent pixels to work as one to increase light sensitivity. It allows photographers to use the same front camera to take quality photos in various lighting conditions.

The sensor’s small pixel size makes it fit in a thinner camera module so that premium smartphones may offer high resolution cameras in a slimmer and more refined design.

Samsung foresees an upbeat growth potential for image sensors. The world’s No. 1 semiconductor by sales said in a conference call with analysts in April that the company would convert part of its DRAM production line in Hwaseong, Gyeonggi plant into one devoted to Cmos image sensor manufacturing.

“With more smartphones adopting dual cameras, the demand has been rising for image sensors and we have additional demand from applications in virtual reality, 360-degree cameras and automobiles,” said Jeon Se-won, executive director of the memory business division at Samsung. Mass production of sensors is slated for the first half of next year, but its operation will be flexible, he added.

Samsung faces stiff competition in the image sensor market from Sony, the world’s top image sensor producer, which currently controls nearly 50 percent of the market. Back in 2012, Sony announced it would focus on three major sectors - games, mobile and image sensors - and posted record-high quarterly profits in the first fiscal quarter that ended in June this year, on the back of robust image sensor sales. One of its key clients is Apple.