SsangYong Motor now No. 3 in Korea

SsangYong Motor now No. 3 in Korea 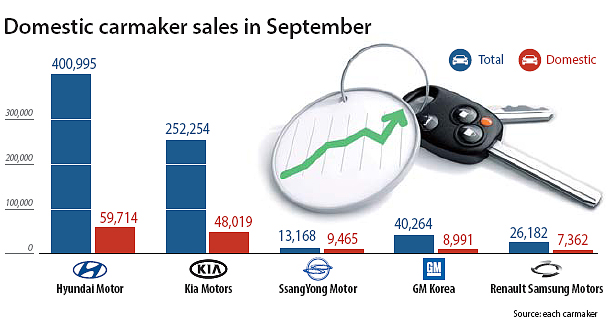 SsangYong Motor, the Korean unit of Indian auto giant Mahindra & Mahindra, climbed up to the No.3 spot in Korea’s domestic market for the first time ever in the month of September.

The automaker’s focus on its SUV lineup and good relationship with its labor union has played a large role in the recent success. SsangYong Motor has successfully negotiated with its labor union without controversy for eight straight years, enabling the company to cut back on unnecessary costs.

After showing solid sales growth for the past three months, the SUV-oriented carmaker sold 9,465 cars in Korea in September, becoming the third most popular carmaker for the first time ever. It sold an additional 3,703 cars overseas, surpassing the 13,000 mark for the first time this year.

“On the back of popularity of new cars this year, SsangYong Motor was able to snatch the No. 3 spot for domestic sales for the first time since the company was founded,” Choi Johng-shik, CEO of the carmaker said. “On top of domestic sales, SsangYong will continue to lead the way in the global market with the G4 Rexton in Europe,” the CEO added.

The full-size SUV G4 Rexton was launched in Korea earlier this year and in the U.K. last month. Ssangyong is gearing up for the car’s global launch in other European markets as well as the Middle East and Latin America in the near future.

This year, Hyundai Motor’s labor union postponed its negotiation and possible walkouts until the end of the Chuseok holiday that finished on Oct. 9.

A lack of new cars, as well as continuous rumors that it plans to pull out of the country, have caused GM’s domestic sales to suffer. Renault Samsung Motors sold 26,182 cars in total, 7,362 of which went to Korean customers. Its domestic sales recorded a 20.2 percent year-on-year drop.