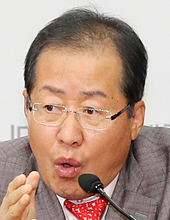 The government has denied recent claims by the main opposition party leader, Hong Joon-pyo, that the Moon Jae-in administration has illegally monitored him.

Chairman Hong of the Liberty Korea Party first made the allegation on Monday during a party leadership meeting, claiming that the prosecution, police and military conducted surveillance of his secretary’s mobile phone.

Hong added, “I cannot understand why my secretary’s phone was being looked into. Probably they want to know who I was talking to. The law has changed and when an authority investigates a phone log, the communication service provider must inform the owner of the phone.”

Claiming he was a victim of “political surveillance,” Hong said most of the key members of the Liberty Korea Party were also probably under government surveillance. Hong ordered the party officials to turn off the GPS tracking function of their mobile phones, claiming the government probably wanted to know who they were meeting.

According to the Liberty Korea Party, the police, prosecution and military looked into the mobile communication information of Hong’s secretary on six occasions from December to August. Yangsan Police of South Gyeongsang conducted the first check on Dec. 13, 2016. The South Gyeongsang Provincial Police Agency looked into it on Feb. 24 and April 12. The Seoul Central District Prosecutors’ Office conducted two checks on March 21 and Aug. 7, and the Army headquarters on Aug. 21. Two checks in August by the prosecution and the military were conducted since Moon took office in May.

After Hong’s claim, the party demanded that the Moon administration issue a proper explanation. Moon also ordered his aides to launch a fact-finding mission and offer a satisfactory explanation to the head of the largest opposition party.

“During a meeting with senior secretaries, Moon ordered to find out what was going on,” a Blue House official said on Tuesday. “The president said the government must offer a proper and sincere explanation to prevent a possible wrangle, since it was an allegation raised by the head of the largest opposition party.”

Following Moon’s order, South Gyeongsang Provincial Police Agency announced that it had inquired as to the basic phone information of Hong’s aide, surnamed Son. “During an investigation, Son’s number came up among the contacts of a suspect, so we checked the basic information,” the police said. “It was not political surveillance.”

Yangsan Police, which made the initial inquiry in December 2016, came across Son’s number last year during its investigation into a bribery receiving charge involving a former public servant of Yangsan City Government. The suspect and Son had multiple phone conversations and text message exchanges, police said.

South Gyeongsang Police Agency made two inquiries in February and April this year, during its investigation into the bribery receiving charges of Cha Jeong-seop, then head of Haman County, and his aide.

Hong has a strong tie to the region. He was first elected the governor of South Gyeongsang in 2012 and reelected in 2014. After winning the conservative party’s presidential nomination, Hong stepped down from the office at the last minute. Hong finished second among the five major candidates with 24 percent. Moon was elected with 41.1 percent. Despite his defeat, the Liberty Korea Party still elected him as its new chairman.

The prosecution also said it checked on Son’s phone information while confirming identities of the people who had multiple calls with suspects of two separate cases. The Army also said the military prosecutors confirmed the identity of Son because he talked to a suspect.

While looking into the details of a phone communication log requires a court warrant, law enforcement authorities can ask service providers to provide the identities of phone owners without a warrant. According to Rep. Lee Eun-kwon of the Liberty Korea Party, investigative authorities made 12.97 million inquiries to the nation’s three service providers in 2014, 10.58 million in 2015, 8.27 million in 2016 and 3.37 million from January to June this year.