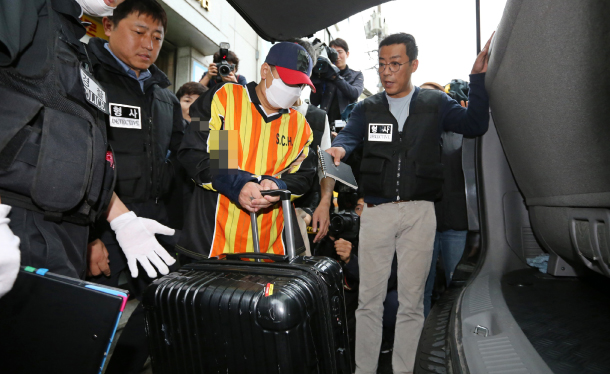 Surrounded by policemen, Lee Young-hak, who was accused of killing his 14-year-old daughter’s friend late last month, reenacts his crime at his house in Jungnang District, eastern Seoul, on Wednesday. [YONHAP]

The 35-year-old man who was accused of killing his 14-year-old daughter’s friend late last month and dumping the corpse on a mountain has admitted to the murder Tuesday, reversing his previous account that the victim overdosed on sleeping pills.

But police have yet to figure out his motive. An officer at the Jungnang Police Precinct in eastern Seoul, who’s investigating the case, said the father, named Lee Young-hak, was dodging their questions. Until Tuesday, Lee, who has second-grade intellectual disabilities, had acknowledged abandoning the body in the outskirts of Gangwon, but denied murdering the girl.

Lee’s case has garnered more media attention here than other heinous crimes because he appeared in local TV programs several times since 2006, most recently last February, under the nickname “Molar Daddy.” Lee suffers from a rare genetic disorder called gigantiform cementoma, a hereditary tumor that causes disfigurement of the jaws and teeth.

Numerous surgeries have left him with only one molar tooth, earning him the nickname. Through emotionally charged interviews and statements, Lee has relied on TV shows and fundraising events to raise donations for his daughter, who has the same disease.

In 2007, he published a book titled “Molar Daddy’s Happiness.”

His daughter, who was caught on CCTV helping him load the victim’s body into the trunk of a vehicle, also took back her earlier account that Lee personally gave the sleeping pills to her friend, saying she was the one who dropped it in a bottled drink and handed it to the victim, as ordered by her dad.

Police said the daughter denied knowing Lee was planning to kill her friend. She testified to leaving the house for about four hours to play with some other friends, only to return to see her friend dead. The daughter testified she was close to the victim in elementary school and that Lee said he had killed her.

One mystery is why the father targeted the girl, said police, because she and his daughter barely made any contact over the past two years. Officers said the friend had arrived at the house on Sept. 30 only after continuous requests from the young accomplice that they meet there.

Jungnang police have asked the prosecution to file a pre-trial detention warrant for the daughter. If prosecutors do so, a local court will decide whether to detain the minor.

No evidence of rape has been detected yet, according to authorities, although the victim was naked when they retrieved the body from a mountain in Yeongwol County, Gangwon.

Police began investigating the case on the night of Sept. 30, when the victim’s parents dialed 112 to report their child missing. Police went through CCTVs around the suspects’ house and saw that the victim went inside near noon, but had not come out. Lee and his daughter were caught on camera the next day carrying a large black suitcase and loading it into a car parked outside their home.

Police arrested them on Oct. 5 in a villa in Dobong District, northern Seoul. Both were unconscious from an overdose of sleeping pills. A tablet PC placed nearby showed a video featuring Lee claiming the victim accidentally swallowed sleeping pills during her visit to his house and that he dumped the body because he had panicked.