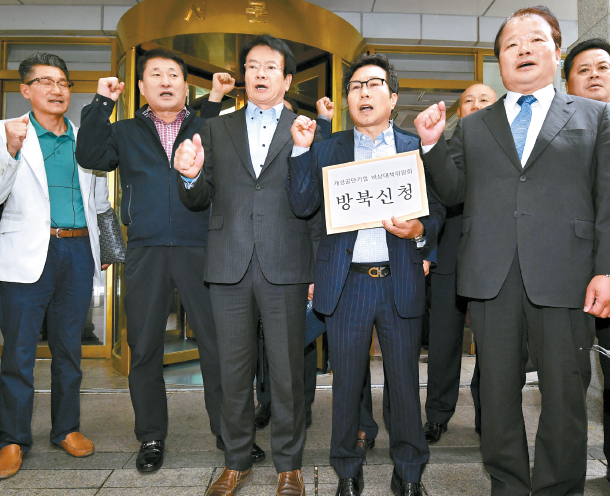 South Korean businessmen who own factories at the Kaesong Industrial Complex in North Korea, which was shut down in February last year, visit the government complex in Gwanghwamun, central Seoul Thursday to request the government approve a visit to Kaesong in order to check their facilities there. [YONHAP]

Forty South Korean businessmen who own factories at the Kaesong Industrial Complex, an inter-Korean venture shut down in February 2016, have formally asked the government Thursday to approve their visit to the North Korean border town in order to check their facilities after Pyongyang admitted to using them without their consent.

South Korean nationals need approval from the government in order to contact anyone in the North or visit the country.

The Unification Ministry, which handles South-North relations and grants the approvals, said it will review the “overall circumstances” of the application, but stressed that Pyongyang will have to agree with the visit beforehand and guarantee the visitors’ safety.

North Korea has yet to publicly mention anything on the visit request.

Seoul’s decision to pull out of the Kaesong project on Feb. 10, 2016, came in response to North Korea’s fourth nuclear test that January and a subsequent satellite launch.

One day later, the North announced it would freeze all South Korean assets at the zone, sever all communication channels across the border, shut down the only highway that linked the two Koreas and place the complex under the control of its military.

The Unification Ministry has neither confirmed nor denied the Radio Free Asia report that North Korea was secretly running 19 South Korean-owned clothing factories in the industrial park without informing Seoul, but admitted Tuesday to having witnessed streetlights switched on and shuttle buses “sporadically” moving about.

But those hints weren’t enough to say with certainty that Pyongyang was operating the factories, said the ministry.

In a joint statement released to local media, the South Korean businessmen said they were “devastated” by North Korea’s use of their assets and urged the government to figure out how they managed to get away with it.

In a separate open letter to President Moon Jae-in, the group asked the administration to investigate the legitimacy behind the former Park Geun-hye government’s decision to pull out of the Kaesong project.

North Korea’s reopening of Kaesong came to light last week, when Radio Free Asia cited two sources in China involved in trade with the North as saying Pyongyang was secretly running South Korean-owned clothing factories in the industrial park, with one source saying it has been “definitely more than six months.” Most textiles North Korea was producing were for orders made from China, and the electricity was diverted from the North’s munitions sector, the sources continued.

In admission, Uriminzokkiri, a North Korean propaganda website, said last Saturday that anyone with normal eyesight could “see for sure how proudly our laborers work” at the complex, and that no other country had the right to interfere in its domestic affairs.