A ‘Revolution’ comes to tvN in drama form

A ‘Revolution’ comes to tvN in drama form 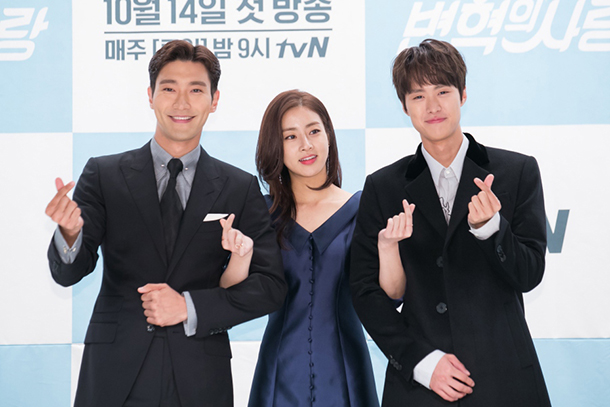 Song Hyun-wook, the director of the hit tvN series “Another Miss Oh” is back on set, this time with another tvN drama titled “Revolution.”

Like other popular dramas such as KBS2’s “Fight for My Way” and “Strongest Deliveryman” (2017), which have young main characters working fiercely to achieve their dreams in the midst of the bitter reality, “Revolution” hopes to deliver important messages about life to a young audience. The show centers around three characters in their twenties with different social backgrounds, personalities and goals coming together to understand one another and help each other to realize their dreams.

“The three characters have very different worries and goals regarding family, employment and success,” the director said Thursday at press conference held in southern Seoul.

He hopes the viewers witness how they collide and mingle together, and through this process, mature into three adults that they hope to become.

“I haven’t had this much fun on set since the movie ‘Sunny,’” said actress Kang So-ra, one of the main three characters of the story. “I am confident that the synergy and positive energy that the actors and actresses felt on set will be passed on to the audience.”

The drama also co-stars Choi Si-won and Gong Myoung. The first of its 16 episodes premieres on Saturday.