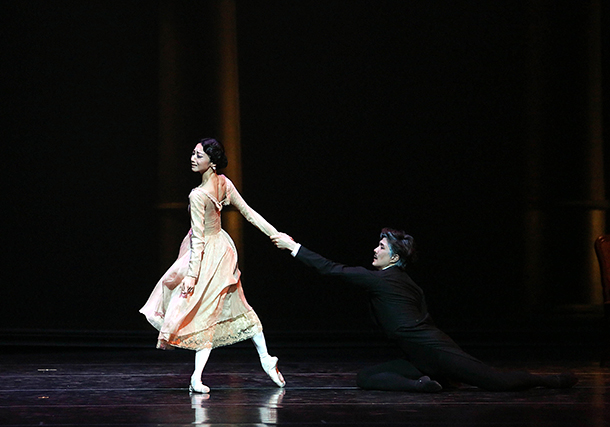 Universal Ballet Company’s two star dancers Hwang Hye-min, 39, and Ohm Jae-yong, 38, who are still in their prime, officially announced their retirement as principal dancers on Thursday at a press conference in central Seoul. The two dancers, who are also married to each other, will stage their farewell performance playing the leading roles in John Cranko’s “Onegin,” which kicks off at the Seoul Arts Center on Nov. 24.

“It may seem quite early for me to retire,” said Hwang, “but, I always thought about my last day as a dancer and I wanted that to be while I’m still enjoying my heyday.”

Hwang is known to be one of the few ballerinas in Korea to have the perfect physique to be a ballerina, with critics praising her talent and even recently commenting that she still dances like ballerinas in their 20s.

But for Hwang, this is when she wanted to leave the ballet world.

“I didn’t want to retire when people start to say that it is about time that I come down from the stage,” she said. Hwang also expressed her desire to have a baby “before it’s too late.”

Meanwhile for Ohm, although he’ll retire from the company, he said he’ll continue to work as a dancer in smaller projects for other companies and perhaps think about working as a teacher or a choreographer in the future.

But for now, the two say they want to take a long rest, and for the first time, be free from the strict self-discipline they’ve needed to have.

“For me, I want to travel around Korea, starting from Jeju Island and moving my way up to stop at all the famous restaurants that I only have been able to drool at,” said Ohm, adding that holding back his appetite to maintain the best figure is the most difficult part of being a dancer.

For Hwang, she has already booked a hair appointment the day after her final performance on Nov. 26.

“For ballerinas, your hair is like one of the props,” she said. “I’ve always had this long black hair so that I can tie it up, braid it or have it down to suit the characters I play. But this time, I’m going to cut it really short and color it really bright.”

Although the two dancers feel bittersweet about their retirement, Julia Moon, director of the UBC, may be the one who is the most sorry to see two of the best dancers of the company taking their last bow.

“It’s difficult to hold back the tears but I want to honor them,” said Moon. “The two dancers have been the best examples of the vision of the company, which is ‘Heavenly Art Creating a World of Beauty.’ We believe that dancers as artists should serve the art rather than to take advantage of it and Hwang and Ohm really lived with that spirit for the past 15 years at the UBC. So I would really like to honor them for their decision and thank them.”

The couple says they’ve performed together more than 1,000 times as partners at the UBC. Among all the repertoires of the company, the couple picked “Onegin” as their farewell piece.

“Unlike other pieces that focus more on showing the techniques, ‘Onegin’ is a real narrative ballet drama, which is almost like watching a film,” said Ohm. “We wanted to show everything we can as well as touch the hearts of the audience with this beautiful piece of ballet.”