Chinese automakers on the rise

Chinese automakers on the rise 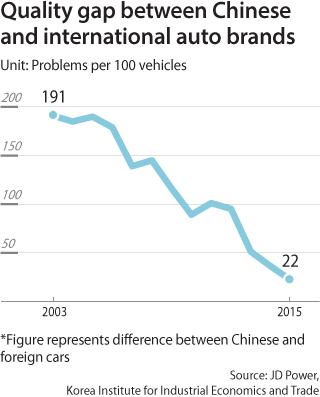 While Korean automakers’ sales are slowing down domestically and abroad, their Chinese rivals are catching up, gaining ground in their home market and internationally.

During the International Motor Show Germany last month, Chery Automobile, a Chinese state-owned automaker, opened a booth where the company showcased its own sports utility vehicles and electric concept cars. It was the first time the company had its own booth at the motor show.

Chen Anning, the company’s chief executive, said at the show that its vehicles were equipped with the latest control systems and displays while design had been done by professionals in Europe. Chen said Chery would soon launch models in global markets, including Europe.

Chery is one of many Chinese automakers extending their reach beyond the country’s borders. Together, they made nearly a third of all cars produced in the world in 2016 and increased their share in the Chinese market from around 38 percent to nearly 50 percent in just the past three years.

Meanwhile, Korean automakers have been losing ground in the Chinese market, with their share falling to 4 percent in May from 9 percent in 2014, according to data from the Korea Institute for Industrial Economics and Trade.

“Korean cars had the upper hand over Chinese cars in terms of quality and technology, but this superiority has been degraded recently with Chinese cars gaining competitiveness,” said Cho Chuel, director of Chinese industry research at the institute. “With the rise of Chinese brands, Korean automakers, whose brand power falls behind German, Japanese and American counterparts, are taking hits.”

In terms of quality, Chinese automakers have been catching up to other manufacturers around the world, including Korean companies. In 2000, the difference in number of problems per 100 vehicles between Chinese and international brands was nearly 400, according to data from JD Power.

In just a little over a decade, that gap has fallen to below 20.

“The new vehicle quality gap between Chinese domestic brands and international brands is 13 problems per 100 vehicles in 2017,” JD Power wrote in a recent report, “which marks the seventh consecutive year of a narrowing gap.”

Armed with comparable quality and competitive prices, Chinese automakers are setting their eyes on overseas markets. While developing economies like Brazil, Mexico and Southeast Asian countries are obvious choices, Korea is also on their maps. Early this year, the Kenbo 600, an SUV from Beijing-based BAIC Motor, launched in Korea with a price tag of 20 million won ($17,600). As of August, 260 of them have been sold in Korea.

Chinese automakers could become formidable competitors against Korean companies. Fourin, a Japanese market research firm specializing in the Asian auto industry, said in a recent report that Korean cars have been stuck in low gear in the Chinese and North American markets, pushed down by Chinese and Japanese rivals.

Once the fifth-largest car producer in the world, Korea stepped down to sixth last year, giving up its spot to India. At this rate, Mexico, currently seventh, could drag Korea down further this year.

“In the past, American and European auto companies looked down on Korean companies and fell behind,” said Kim Pil-soo, an automotive engineering professor at Daelim University. “Now, Korean companies must be on alert” to avoid the same mistake.