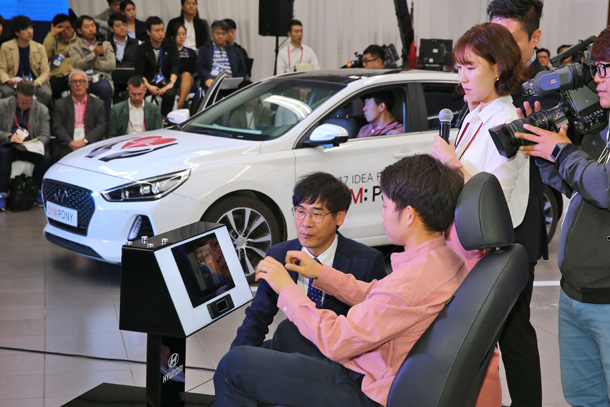 HWASEONG, Gyeonggi - As the sound of an ambulance swept through the exhibition room, a green light appeared on the bottom of the windshield. When the sound of a car horn blared out, the color of the light changed to blue.

Hyundai Motor and Kia Motors have been holding a so-called “R&D Idea Festival” since 2010 to encourage cooperation between engineers and to earn insights into unique concepts that could play a part in the future of mobility.

Teams, made up of four to eight engineers that work for the automaker, compete in the festival. This year eight teams advanced to the final following an initial screening process in April.

A team dubbed “Symphony” was named as the overall winner, creating a series of artificial intelligence systems to aid driving for deaf or partially deaf people.

The team used light emitting diodes to change the color of a light that appears at the bottom of the windshield depending on the frequency of certain sounds.

The color of the bar changes to red for fire trucks, green for ambulances and blue for police cars and car horns.

The team also offered a safety band that vibrates when alarming sounds have been detected. This way, the driver can first be alarmed through the vibration and check the color on the windshield to know what is actually going on at the road.

“A member of the team actually has a deaf cousin and the system was designed based on real-life feedback,” a spokesperson from Hyundai Motor said.

“While the number of deaf drivers increases by three-fold every year, there hasn’t been much consideration for them.”

Voice can also be translated to a video of sign language and written text. The translator would be particularly useful if an accident occurs, according to Symphony, as the program makes conversation considerably easier.

“There were a lot of ideas that we can develop further for commercialization,” said Yang Woong-chul, vice chairman of Hyundai Motor. “We look forward to adopting all safety related ideas.”

Other contestants that introduced ideas to enhance car safety were “Thinker Belt,” a team that developed an automatic seat belt system that can significantly increase the chance of passengers in the back of a car wearing their seatbelts, and “Hyundai Smile Taxi,” which came up with a program that collects data of taxi drivers’ driving habits in real time and provides either warnings or compliments in a child’s voice to motivate safer driving.

Among other notable ideas were: a sharing system of electrical motors that power various means of transportation including wheelchairs, bicycles and strollers; an automatic dust cleaning device for a car’s exterior; and a car interior designed as a fluid and adaptable space that can easily be adjusted based on drivers’ needs, rather than a solid space consisting of seats and a trunk.

The selected ideas from the contest will later be introduced at local motor shows and corporate events to boost the research and development culture group-wide, Hyundai Motor Group said in a statement.