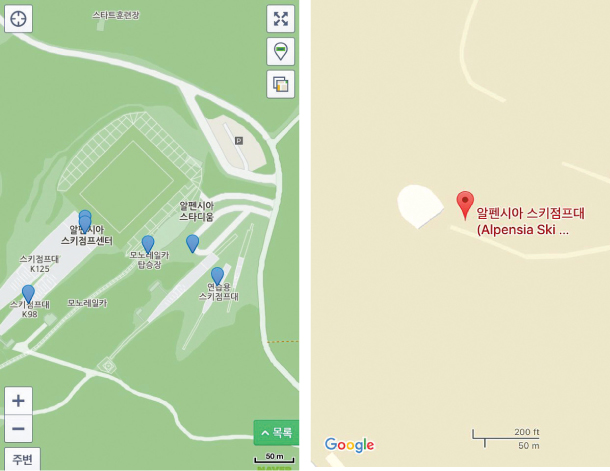 Tourists and expatriates in Korea will no longer have to wander around using the vague information offered on Google Maps to get from A to B. Ahead of the PyeongChang Winter Olympics next February, Korean map app makers are rushing to release English and Chinese versions.

Naver, operator of the country’s top internet portal, is working on both English and Chinese versions for its Naver Map app. It will introduce an English option first and come up with a Chinese version after monitoring customer reactions, the company said on Thursday. A Naver spokesman said the service will be ready before the winter games kick off, but did not provide a specific timeline.

Kakao, operator of the KakaoTalk messaging app, is preparing to launch an English version of Kakao Map as early as December. The company is also set to incorporate an English voice guide to Kakao Navi, a navigation app, about the same time.

“Key features on the map app such as various transportation options and the time to destination will be available in English,” said a Kakao spokesman.

Users can choose the language they prefer and if their smartphone’s language is set to English, the English version of the app will be automatically offered.

As of February, Naver Map was the most popular map app in Korea with 8.08 million monthly active users according to WiseApp, an app analyzing site, trailed by Google Maps at 7.66 million and Kakao Map at 3.09 million.

Google Maps, the world’s most used map app, is not able to provide its typical services - directions, navigation, street view and even an elevation profile for walking - to the same level in Korea. Users in the country may only get access to public transportation routes - save for subways - and simple street maps because the Korean government has dismissed Google’s request to use mapping data since 2007 as its servers are outside Korea. The Korean authorities again cited security concerns regarding North Korea when rejecting Google’s most recent bid in June last year.

Foreign travelers and residents with little Korean proficiency, as well as travel agencies, have been complaining about the government’s persistent refusal to accept Google’s demand, whereas authorities and some experts argue that Google should comply with related local laws that mandate foreign tech firms to install and operate data servers locally.

The Ministry of Land, Infrastructure and Transport has been lending a hand to local developers. Last July, the ministry inked a deal with Kakao to provide three-dimension space information free of charge to help the company develop new virtual reality- and augmented reality-based services on Kakao Map and other apps. The information was previously off limits to the private sector.