A ‘Resurrected Victim’ returns with a purpose

A ‘Resurrected Victim’ returns with a purpose 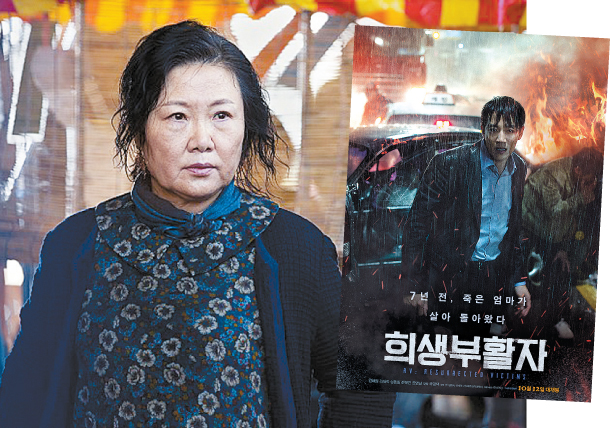 The upcoming “RV: Resurrected Victims” is a mystery thriller revolving around a mother who comes back to life seven years after her death. [SHOWBOX]

A dead person coming back to life to avenge their killer sounds like an impossible feat that could only happen in someone’s dreams. But reports of this rare occurrence, known as Resurrected Victims Phenomenon (RVP), have been made across the globe, which inspired director Kwak Kyung-taek to create a movie.

Adapted from a 2012 novel from author Park Ha-ik, Kwak’s upcoming mystery thriller “RV: Resurrected Victims” features veteran actress Kim Hae-sook and actor Kim Rae-won. The story follows the story of a mother named Myeong-suk, who is stabbed to death on the street after being chased by a robber looking to steal her money, and her prosecutor son Jin-hong, who she sacrificed everything for.

Things start picking up when Myeong-suk returns seven years after her death, and surprisingly attacks her son. Since RVP cases reported around the world saw victims attacking their killers, the National Intelligence Service and police suspect that Jin-hong is the one behind his mother’s murder.

“I mulled over how to depict a resurrected victim, making sure to make a distinction between them and Western zombies and Asian ghosts. Since there needed to be a plausible background, I added elements of mysterious documentaries that I enjoy watching to the movie,” the director said during a press preview that was held in central Seoul earlier this week. “I was a little worried since the genre is not something that I had worked on before.”

Kwak is behind films like the crime drama “The Classified File” (2015) and the noir action flick “Friend: The Great Legacy” (2013).

To make the story fit as a film, the director added some elements that are not in the original novel, including the dramatic rain that falls when the victim comes back to life.

“Though there is no rain in the novel, I hoped to create the mysterious ambience that rain gives off on the big screen when showing the resurrected victim instead depicting a bright sky,” the director added.

Kim Rae-won explained how he labored over how to best portray his character in the movie.

“I was curious about the theme when I first read the script,” the actor said. He added, “I asked the director so many questions, to the extent of being obsessed. I thought that [asking questions] would be helpful in depicting the confusion the character feels. I worked a lot on the role’s psychological state.”

Kim Hae-sook similarly expressed her fondness for the movie, saying that mystery thriller is her favorite genre.

The veteran actress, who has collaborated with Kim Rae-won as his mother in multiple roles, said ,“[Rae-won] and I trust in each other, not only as colleagues, but also as actors. We can feel [what the other is thinking] just by looking into each other’s eyes. It was my third time [playing his mother], and it was the best.”

The movie, which co-stars Jeon Hye-jin and Sung Dong-il, was released on Thursday. The 91-minute film is rated 15 and above.