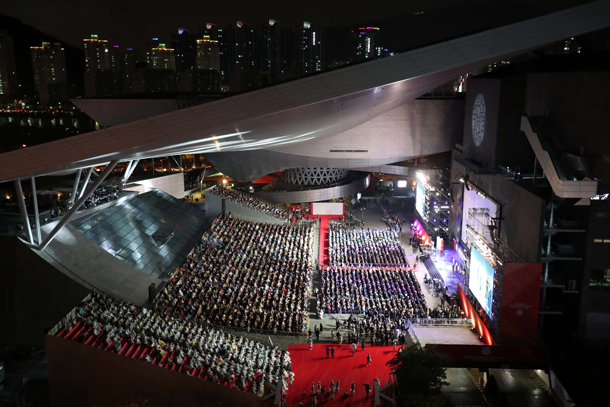 The 22nd edition of the Busan International Film Festival (BIFF) kicked off its 10-day run in the southern port city of Busan Thursday evening.

During the opening ceremony, late Japanese auteur Seijun Suzuki was named the Asian Filmmaker of the Year for his contribution to the development of Asian film industry while Christoph Terhechte, the head of the Berlin International Film Festival’s Forum section, received the Korean Cinema Award for his work making a wide range of Korean cinema available to global audiences.

This year’s BIFF, which has grown into Asia’s largest and most prestigious film festival, will show 300 movies from 75 countries, including 99 world premieres and 31 international premieres. 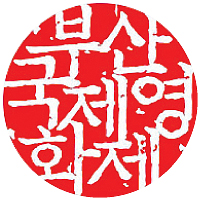 The festival officially kicked off at 6 p.m. with a screening of the mystery drama “Glass Garden.”

Directed by Shin Su-won of the award-winning “Madonna” (2015), and starring Moon Geun-young and Kim Tae-hun, the film revolves around two characters: a scientist (Moon) who conducts research alone in a glass garden and a writer (Kim) who is working on a novel about the researcher.

In addition to the opening movie, other big-name flicks on the festival’s lineup include director Darren Aronofsky’s R-rated thriller “Mother!” and Hirokazu Koreeda’s drama “The Third Murder,” which was also invited to compete at the 74th Venice International Film Festival earlier this year. Director Guillermo del Toro’s “The Shape of Water,” the grand prize winner in Venice, will also be screened.

Other noteworthy movies are Sho Tsukikawa’s “Let Me Eat Your Pancreas,” a film adaptation of Japanese author Yoru Sumino’s 2015 best-selling novel, and Lee Kwang-kuk’s romance “A Tiger in Winter.” Lee’s film will mark actress Go Hyun-jung’s return to the silver screen for the first time in five years.

Ten movies will vie for the grand prize under the New Currents section. They include the Indian film “Ajji,” about an old woman who vows to avenge the son of a politician for attacking her granddaughter, and the Chinese coming-of-age movie “End of Summer,” which depicts the growth of a soccer-loving boy in the summer of 1998. Korean movies “After My Death,” which is based on the death of a missing girl, and “How to Breathe Underwater,” which depicts the tragedy of two families, are also up for competition.

A number of high profile international cineastes are set to make appearances at the annual festival. The lineup includes auteurs Aronofsky, Koreeda and Hou Hsiao-hsien, as well as actress Yu Aoi. Oscar-winning actress Jennifer Lawrence was originally scheduled to make an appearance, but had to cancel due to scheduling conflicts.

Special events will provide attendees with a look at the possible future of the film industry.

There will be a conference on the VR industry and its relation to films, featuring screenings of 35 VR movies. Eugene Chung’s “Arden’s Wake: The Prologue” and Gina Kim’s “Bloodless,” which were given the Best VR Award and Best VR Story Award at this year’s Venice International Film Festival, will be screened.

The festival will commemorate late BIFF director Kim Ji-seok, who died of a heart attack in May at a hotel in Cannes, where he was attending the 70th Cannes Film Festival. Kim was a founding member and executive programmer of the Busan film event which launched in 1996.

A commemoration event where film industry figures from Korea and abroad will share their memories of Kim will take place on Sunday. The festival has also created the Kim Jiseok Award in the Window of Asian Cinema section, which introduces the latest films from established Asian directors.

Meanwhile, two BIFF leaders will step down from their positions after this year’s festival wraps. Chairman Kim Dong-ho and executive director Kang Soo-youn announced in August their decision to resign as a response to the still ongoing debate in the film industry over the festival’s artistic freedom.

The two have come under criticism from the film industry for failing to reform the festival, which has suffered since former festival director Lee Yong-kwan went ahead with screening the controversial documentary “The Truth Shall Not Sink with Sewol” in 2014, despite opposition from Busan Mayor Suh Byung-soo.