Pyongyang says it will never agree to a nuclear deal so long as U.S. maintains pressure

Pyongyang says it will never agree to a nuclear deal so long as U.S. maintains pressure 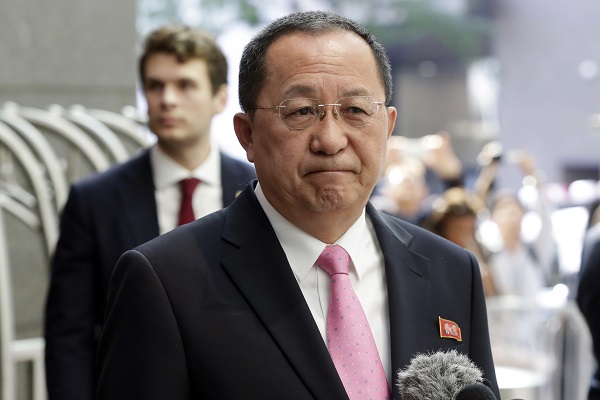 He also told Russia's official Tass news agency that U.S. President Donald Trump has “lit the fuse of war” with his “belligerent and insane statement” at the United Nations General Assembly, referring to Trump’s address on Sept. 19, threatening to “totally destroy North Korea.”

Ri, who also spoke at the General Assembly that same week, told reporters in New York that the U.S. president has “declared war on our country,” leading to war of words between the American leader and Pyongyang over the past month.

North Korea has “nearly achieved the final point on the way to our ultimate goal, to achieving a real balance of force with the United
States,” Ri also told Tass. “Our nuclear weapons will never be a subject matter of negotiations as long as the United States’ policy of pressure on the DPRK [Democratic People’s Republic of Korea] has not been uprooted once and for all.”

The North Korean top diplomat met with a delegation led by Sergey Mikhailov, director general of Tass, in Pyongyang at the invitation of the North’s state-run Korean Central News Agency.

Ri said that it is Washington’s “turn to pay” and that the North Korean military servicemen and people “insistently demand that final scores be settled with the Americans only with a hail of fire, and not with words.”

China and Russia have called for a “double freeze,” whereby the North suspends its nuclear and missile tests in exchange for South Korea and the United States halting their joint military exercises, to get Pyongyang back to the negotiating table. This has been rejected by Washington.

Thursday marked the 69th anniversary of Russia and North Korea establishing diplomatic ties.
Earlier this month, Ri was promoted as a member of the Politburo of the Workers’ Party’s Central Committee.

He added that North Korea sees “no prospect for improving the inter-Korean relations” as long as Seoul continues to resort to sanctions and pressure campaign, in line with the United States.

Trump said that he feels "stronger and tougher" than others on North Korea, admitting he and U.S. Secretary of State Rex Tillerson do not necessarily see eye-to-eye on the issue.

Trump, at the beginning of the month, shot down Tillerson’s diplomatic efforts toward North Korea, tweeting, “Save your energy Rex,” and insinuating that he has other plans for Pyongyang.

When asked if he and Tillerson are on the same page on how to deal with North Korea, Trump said Wednesday he has "a little bit of a different attitude on North Korea than other people might have."

He told reporters as he met with Canadian Prime Minister Justin Trudeau at the White House, “I listen to everybody, but ultimately my attitude is the one that matters, isn't it?”

The president reportedly said that he wanted a nearly tenfold increase in the U.S. nuclear weapons stockpile in a meeting in July with his national security leaders, according to NBC News Wednesday, citing officials present in the room.

These officials were reported to have said that Trump referenced a period in the late 1960s when the country possessed some 32,000 nuclear warheads and said that he wanted to have that many now. In turn, the officials explained to the president why expanding U.S. nuclear arsenal was not feasible in present times and would also violate treaties, and that the current conventional and nonconventional military arsenal leaves the U.S. defense posture stronger.

NBC also reported that Trump asked during that meeting why the South Koreans aren’t more appreciative of American defense aid, and that a senior military official had to explain the overall relationship and why it ultimately beneficial to U.S. national security interests.

The United States currently has a stockpile of around 4,000 nuclear warheads.
“I never discussed increasing it,” said Trump to press, rejecting the report on his call for an increase in nuclear arsenal as “fake news,” during his meeting with Trudeau. “Right now, we have so many nuclear weapons. I want them in perfect condition, perfect shape. That's the only thing I've ever discussed.”

He added, “We don’t need an increase. But I want modernization and I want total rehabilitation. It’s got to be in tip-top shape.”
Trump and his national security team were briefed by top U.S. defense officials the previous day on a “range of options” to respond North Korean aggression and prevent its threats.